The beach side cafe is reasonably common in ‘Straya’, seeing as there is a little bit of coast line. Just a little.

So while we had a quiet weekend away in Bryon Bay– Australia’s more laid back seaside town- we had to make the most of one of the best seas side joints around. And eat some Whale…

No, I am lying, but if it made you read further down to here, then I say ‘sorry’ (which only kind of means sorry), but more thank you for continuing, for I did come close to where whales were eaten. So I kind of was half right.

You’d wouldn’t be wrong if you are now asking- what the f**k are you talking about?! 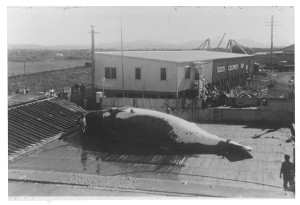 Well, Belongil Beach, just down from the main beach at Bryon Bay is home to the Belongil Bistro. Out front of the eatery is a large rustic railway sleeper and a train wheel. I learnt on entering that these belonged to the former railroad from the last 1950’s which carted slaughtered whales from Belongil Beach down to the nearby meat works.

So, this poses a question for me; in a time of little knowledge around the effect of culling animals and any need for differentiation between one animal and the next (say a cow and a whale), is it an issue that this went on then?

I know most people will undoubtedly say YES! But I don’t completely agree. It’s always rubbed me the wrong way that people can be fine with killing certain animals, en masse, yet the killing of certain other, perhaps more cute and loveable animals, is downright wrong.

I think it’s hypocritical. Sure some can be farmed, hence no need to protect numbers, but that’s just because it’s worked out that they’ve been farmed. I’m pretty sure if we poured enough time and money into it we could see all sorts of animals flourish, like Kiwis, tigers, koalas. Not panda’s though, they just don’t seem to like reproducing. Weird.

Anyway, I just wanted to bring that up today, possibly get a few people thinking about the way in which we kill animals, farm some and make our minds up about the rest judged on our feelings.

After I had essentially this entire thought process in my head in the 5 seconds it took to enter the Belongil Bistro, we sat down to an awesome lunch. I had line caught Barramundi. Amazing  fresh ingredients, lovely warm atmosphere, and a little history to discuss…

NN, feel free to add some value, not just bring up a heated topic, as I have… ahem.

Is it just me or is this not a ridiculous picture?

After you have lived with someone long enough you can almost start to read their minds – well actually I can read Mikes, he struggles to read mine – I think that’s a boy thing.  Without consulting I knew that he would bring up the Whale issue, it is something that he is passionate about whilst I sit on the fence.  I’m not sure whether I want to eat all the animals, just the tasty ones that aren’t cute (kidding).

MC has two major points about this argument; the first being, why should we choose to eat only certain animals and not others based on a certain moral code, especially when there is a food shortage, and secondly, the issue of animal raising and treatment.

The second issue is what I want to discuss today.  Bear with me, as this is quite the segway away from the good ol’ Belongil Bistro, but it is an important one.

Of late, I have been exposed to a lot of material looking at poor farming practises and the terrible treatment of animals in the USA.  MC and I always go on about purchasing only organic, grass fed happy animals, however, apart from the obvious health benefits attached to doing so, I have never really, and I mean really looked at the dark side of mass production farming.

In Australia, we are fortunate enough to have higher standards of treatment for our animals, and certainly better ethics, however, this doesn’t mean that there aren’t some places with shoddy practices.  With this in mind, I want to share with you a little video called ‘Meet your Meat’.

Warning, it’s pretty graphic, and you certainly should not be consuming any meat products whilst watching this.  It is intense, but I think that it is important to gain a good understanding of why we so wholeheartedly recommend places that have ethical farming practices.  The more informed general population are about these terrible practises the more control the consumer can have when choosing meat/food.

So whilst some may say that it’s too expensive to buy organic, grass fed happy animals, when you see a video like this (and there are many examples), how could you not find a way? (buying in bulk, cheaper cuts etc).

That’s my brief two cents worth for this week, and before you start watching the video just know that my lunch consisted of an organic free range Pulled Pork sandwich.  Delicious.

As I said be aware, this is an intense clip!