It may have taken longer last year, but it was always going to happen this year. The questions was when.

When will the first flop be..??

For week 3 of our 52 Eats we took a (possibly former) friends recommendation and searched out the reasonably new Madame Nhu Vietnamese eatery. What do I mean by flop? See below…

Budget – Low (as opposed to cheap)

Yeah, it wasn’t so good. In fact I would go as far as saying I’ll be asking said friend if he was taking the piss when recommending. Then again, everyone’s different. Either way, I won’t be returning.

It’s a bit of a strange one really. We wanted to go somewhere new, and with different food to the last two weeks. Vietnamese seemed like a good little test; can we go and have an awesome meal as well as ensuring we get healthy and recommendable options for people?

Of course in the end the answer would be a resounding no!

What we discovered was anything but recommendable, for me anyway. The staff were so rushed to get us in and fed that we had literally been sitting for 30 seconds before the waiter returned and asked if we were ready to order. “Ah… no. Are you Drunk?” (I didn’t actually say that…) Now I hate to admit it, but this set the tone for me.

We ordered some great sounding dishes, with the hope of great ingredients. These were the Roasted duck summer rolls with hoisin sauce, the Signature đặc biệt phở with beef prepared three ways and Steamed Hải Nam chicken with chilli ginger soy sauce. I was keen to ask a few questions about the food and if things could be requested etc, until I saw this on the back of the menu: 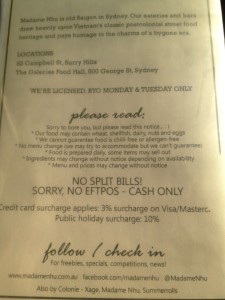 My questioned was answered; there would be no discussing the food with these guys. The reason for which was incredibly soon apparent; 5 minutes after we ordered our mix of starters, soup and main they all arrived at once. This was a glaringly obvious sign to me that the food is all cooked and waiting to be ordered, or heated up in the microwave. Either way, it was out in ridiculously quick time and did nothing for my confidence in the quality.

This is a great thing for some, but for those of us that value our bodies and therefore the food we put into them, rapid fire food in a restaurant isn’t a good sign.

Regardless, we ate and gave it a chance. The beef soup is the signature dish, so the temptation was too much to resist. However, the beef was so-so at best, the broth was tasty but soon became too much and the noodles largely stayed in the bowl. The steamed chicken was underwhelming while the rolls were probably the best part even though they were pretty low on meat and vegetables. 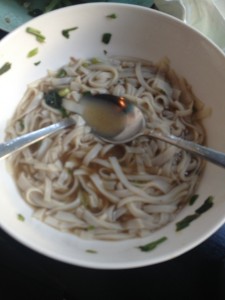 The thought that was ticking over in my mind, besides the unravelling sub-par meal, was how do you come to a restaurant like this and ensure you get actually healthy choices.

The answer is that it’s hard. To ask what they cook in, what’s in the sauces and can you have a dish without something is tricky, as it’s already made.

In hindsight the thing to do is learn from our mistake. Don’t get the noodle soup, as you’ll invariably eat the noodles to fill up. Get salads, meaty skewers and mains that haven’t been deep fried and are limited in starchy things like noodles. Regardless of your nutritional goals, eating at a snappy Vietnamese joint like this requires thought and careful menu selection. Ideally you’ll be able to iron out some of the unknown crinkles with the staff, although perhaps not specifically at Madame Nhu.

The staff didn’t really seem stoked to have paying patrons, the view was of some local Surry Hills pirates boozing on a stoop directly in front of an ‘alcohol free zone’ sign and I left feeling bloated and incredibly unsatisfied. I won’t be going again and don’t recommend that you do. 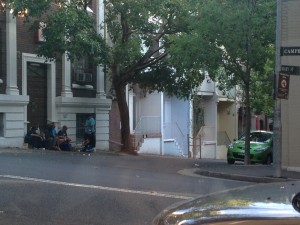 Of course that’s just one man’s thoughts… NN, yours… (Please add some value to my whine…)

Well, I am about to back up MC’s rant.   From the moment we sat down I knew that MC was not going to enjoy the meal.  Madame Nhu was on the back foot from the beginning, but I was hoping that a serving of amazing Vietnamese food would set MC straight.

Alas, it did not.

I love Vietnamese food, and have always maintained that it is one of those cuisines that you can enjoy regardless of your current health and fitness goals.   Traditional Vietnamese food is heavily vegetable based, and contains copious amounts of fresh herbs, with steamed or poached strips of meat.  There are many different elements to the dishes, and essentially chefs try and create ‘balance’ between the yin and yang flavours, the perfect balance between salty and sweet, cool and warm just to name a couple.  I think these particular chefs forgot about their Vietnamese heritage and served up something that was more ‘boring’ balanced with ‘yuck’. 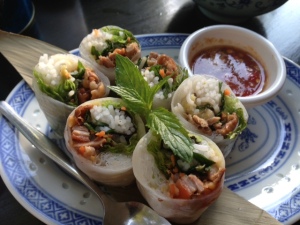 It was very disappointing.

Ordinarily Vietnamese food when done exceptionally well is bursting with fresh flavours and produce, and it is comforting  knowing that each dish is jammed packed full of anti-oxidants.  On this occasion there were not many vegetables on the plate, and the meat was sub-par.  It was easy to tell that we were not eating quality ingredients.  The noodles, which filled up the entire Pho bowl, were left limp-like in luke-warm broth after we both decided against eating them. 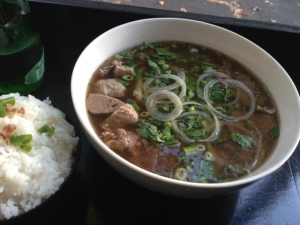 In my opinion Noodles are a weird food; I once adored them because they got me through University (we were  very poor and had little nutritional knowledge- we actually considered beer to be a food group), but these days they are not something that go into our supermarket trolley.  They are of course a carbohydrate, but depending on your dietary theology they can either be considered as an acceptable part of daily intake or not acceptable.  Vietnamese noodles and the paper noodles used for rolls are typically rice based.  Other Noodles such as Udon or Soba tend to be wheat based.  It is important to work out whether you are someone who can tolerate this type of grain, and whether they are a good source of carbohydrate for you.

Many people can handle rice in small amounts but in others it can be an irritant and contribute to gut issues. This is vitally important as problems in the gut lead to weight gain and a myriad of other health issues.

Without getting into too much detail I tend to lean more towards the Paleo style of eating, which means that rice is not part of my usual diet, this is because eating rice is not ideal for me.  If you are someone who is leaning up, can handle rice in small amounts and does have it as part of your diet then I see no harm in including these noodles (but be aware of how many noodles you do consume – it is very easy to consume more than the usual portion size; Note: 1 x cup of cooked noodles in reality looks quite small, so be careful not to over eat them).  For those of you who have other digestive issues such as being gluten intolerant, have Celiac or Chrons disease, IBS or are on a low FODMAP diet then know that the rice noodles can be tolerated in small amounts.

This bowl has more like 6 servings of rice noodles- WAY TOO MUCH!

If you are following a low FODMAP diet than Vietnamese would not be ideal, as most of the dishes use plenty of onion and garlic as their core ingredients.  Just be very cautious when ordering any stir-fry or main dish, and where possible go for the plain poached meats with the steamed veggies, and sauce on the side. 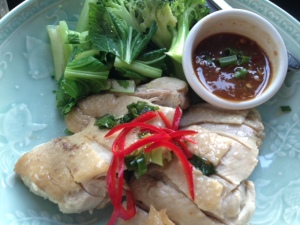 Did we eat all the food that came out?  No.  And we were both very happy to leave food behind that did not measure up.  Just because it is there does not mean to say that it has to be finished.

What this experience highlighted to me was that even though it was cheap and quick, it was certainly at the expense of quality.  And for people who value their health and nutrition that is a ‘no deal’.

So, Madme Nhu, you failed to deliver.

I wonder if they even noticed that as soon as we left them we went across the road and straight into another restaurant to look at the menu?

p.s. If you are curious to know more about Paleo or FODMAP shoot us a message and we can explain it more thoroughly.

2 comments on “Week 3: The Vietnamese place…”