A Middle Eastern winner. Or was it Moroccan..? 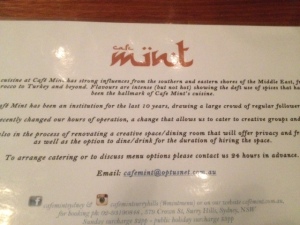 My geography knowledge is pretty average, and this lack of knowledge is often a source of amusement to MC.  There is a game that he particularly likes which involves asking me if I have ever heard of a particular country, and if so, me then telling him where it is located.

More often than not I am waaayyyy wrong (but I’ll say it confidently even when I know I’m wrong – conviction outweighs truth sometimes).  This game has made me feel so bad on occasion, that I actually downloaded an app to teach myself about countries and culture (I personally think that if he wants me to learn them, then he should just take me there).

So there we were on Sat night, sitting in this cute little restaurant Café Mint, with me exclaiming how much I loved Moroccan food, when MC asked the inevitable (and predictable) question…

“So Nardia, where is Morocco?” (Said with a smirk on his face).

“Well, it’s actually located in the Northern region of Africa” I replied, “which part of North Africa?”, “West”… and there it was, the first time I had ever been able to answer the geography question correctly.

A monumental victory for me, which made the dinner taste even better!

Café Mint, located in south Surry Hills, is one of those places that a lot of people know about, and suggest.  As usual we were booked in for dinner at Nana o’clock (yes 6.30pm sitting), and thus it was empty.  The wait staff was amazing and attentive, and made great suggestions on the menu.  However, within half an hour the place was buzzing with people and noise, and the aromas that came from the kitchen were tantalising.

To start we ordered a Merguez Mezze plate, which was a spicy lamb sausage on a bed of eggplant and tomato served on flatbread, and their roasted beetroot, shaved fennel, spinach and feta salad.  The flavours of each of the dish were perfectly balanced (yes I picked that up from My Kitchen Rules), and concentrated.  Each mouthful was a taste explosion.

For Mains we ordered the Roast Chicken and the Lamb Shank.  Again, each dish was bursting with wholesome, perfectly balanced flavours.  For anyone who has tried cooking Middle Eastern foods at home, getting the balance of flavours right between all the spices can be tricky, and more often than not the home chef ends up with a dish with one dominating taste.  Clearly, the chefs at Café Mint are well skilled in their art.

What I particularly like about Middle Eastern/Moroccan food is the variety of spices used.  Spices equal flavour, but they also have unique medicinal properties which when added to the diet on a daily basis have numerous benefits.  Typical Moroccan spices include Salt, Pepper, Ginger, Turmeric, Saffron, Paprika, Cinnamon, Anise, Cumin and Nutmeg.

MC and I indulge in Cinnamon and Turmeric on a daily basis and whilst we could write an essay on the benefits of each individual spice it is suffice to say that these powerful anti-oxidants need to become part of your dietary regime.

I’ll leave it to MC to explain….

I want to get my own back here, but it means I’ll sound like a cock…

But I can’t resist.

Yes NN nailed the Moroccan question, she was right, however, it’s not exactly the Middle East, is it… it’s Africa.

Regardless of our geeky and petty argument, she’s most definitely bang on about spices.

Spices are not only an awesome way to add flavour and excitement to a dish, but they are worth their weight in nutritional benefits, to the extent that many ‘vitamins’ are based on the contents of natural herbs.

I’ll give you the run down on my favourites:

I think that just about covers it for this week. Cafe Mint = awesome food and dining experience with incredibly helpful staff- shit, the waitress even had impressive guns. You know, arms…

Yeah, I was happy to see Merguez sausages… 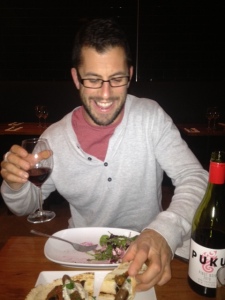 And on that, I’ll leave it.

p.s. Want a bunch of my own awesome recipes? Check out ‘The Alpha Cook Book’