There really is nothing quite like confronting the food situation at a large event- sporting, music or otherwise. For us this week it meant a concert- the one and only Bon Jovi…

Budget – low (very high for what you get) 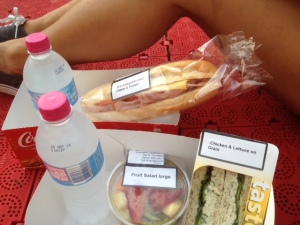 So, what does Bon Jovi have to do with food or nutrition? Well, himself- not much that I know of, but going to one of his gigs means coming face to face with some of the trickiest nutritional choices around.

And this is just exclusive to a Bon Jovi gig, but any sporting event, concert or large event where throngs of people sheep along to. The food options at large events are generally absolute shite!

Of course option 1 is to eat before you go and avoid anything while you’re out there. Easily done with a little planning and preparation. However, that would defeat the purpose of this blog, as we wanted to show no only what  to do, but what is on offer.

You see, when you go to an event like this, certainly here in Australia (and I know it’s essentially the same at home in NZ), the food is overpriced, under nourished rubbish. So when you arrive hungry after a day at work and needing to eat, as it is essentially dinner time, you’re left with options, all of which are sub-par. Well and truly sub-par.

What did the ANZ Stadium and Bon Jovi bring?

I’ve been to this stadium before for sporting events, so I know what’s there, but there was a part of me hoping for a little change… how naive was I?! 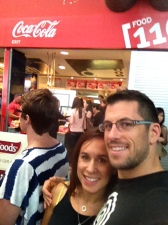 First of all the food lines were that big that you could have lost Jason Bourne in any one of them. Second, they were mostly for the generic food stall- heavily sponsored by Coca-Cola. Outside of this there was a couple of options out the front of the stadium, however, with a wall of people a few hundred or so thick, motivation to join it was thin-to-nonexistent.

Inside we saw countless stalls for Krispy Kreme Donuts, and one for fresh roast beef roll. Now you might think this the best option, and right up my alley, as it were, and you’d be right. However…. the line was actually curling around the stadium and out of sight- I kid you not- so suffice to say I was not going near it. Not even a better food option will see me join a line that big.

So we went with the much shorter line that was the ­Coca-Cola branded ‘eatery’. On offer was a selection of hot ‘meat’ pies, sausage rolls, hotdog, burgers, hot chips, sushi bento boxes, baguettes, sandwiches and the like. As you can imagine, it’s a touch choice.

The best of a bad bunch- or ‘fuck it, just relax and eat whatever’?

As readers of this blog will know, I am a strong advocate for having relaxed meals and also just going balls-out every now and then and eating whatever the hell you want. So this brings in some leeway at the big event such as this. The only problem- it’s all fucking crap! 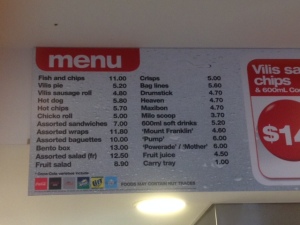 Seriously, I’d gladly just go for a burger, but all this food is such poor quality crap, that I felt i had to avoid the worst and attempt the best.

So the best of a bad bunch it was- a chicken and salad sandwich for me and a ham & cheese baguette for NN. I also got a ‘fresh’ fruit salad and a water. Inspiring stuff. Of course- what was to be expected– comes to mind, but like I said, I was hoping for me.

Anyway, it shows that at tacky places like this for events, there really is little option, apart from having a corporate box and 3 course meal. Not exactly for everyone, though that one, is it..?

How was it affecting everyone else of the 80,000 strong crowd?

Not. One. Bit. Fuck me this was an overweight and unhealthy crowd. Just a massive disease statistic waiting to be formalised. Which mean they were all walking around, Coca-Cola box in hand, stuff with fries, burgers etc etc. It’s not hard to see why we’re such a fucking obese society at events like these.

And its not only that- this excuse for a meal will cost you airport prices! $40 fucking dollars for our food. Daylight robbery.

Again you might be saying- what do you expect? Well, I’ll tell you- someone with some balls and sway to make sure shit like this isn’t peddled at every sporting, musical or other event around the country (and globe). There’s simply no need for it. Where’s some real, wholesome and nutritious food? Shit, where’s some tasty food?!

With events like this happening weekly in cities the world over, with guests in their thousands, it appears the general food theme just continues on in this vein for most; coffee, cigarette and cereal for breakfast, fried (insert piece of shit food here) for lunch and much the same for dinner.

If we are to turn around the mass obesity we see in countries like Australia we need to have mass change when it comes to the kinds of businesses that can get approval for operation at events like this, where thousands of people gather. When there’s no other options available, the main ones must be healthy!

Yeah, so that’s my rant. Bon Jovi on the other hand, well I’ll leave that to NN. Me, I’ve gotta go figure out how you can take something that was most likely food at some stage, and turn it into a combination of cardboard and dirt, aka stadium food…

NN, bring some joy back into this post will you please…? Thanks 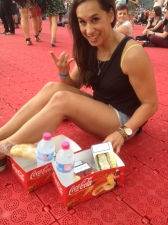 NN settling in for ‘dinner’

MC forewarned me of a rant, but I wasn’t quite prepared for the level of rant that ensued.  As you are probably aware when he gets a bee in his bonnet, he goes for it, and in this circumstance I have to agree.

We were both fully aware of what we were getting ourselves into, but I guess a small part of us were hoping to find some resemblance of ‘healthy, tasty food’.  Nope, our naivety certainly got the better of us.

To put it bluntly the food was shite, terrible, gross, overpriced and fake.  The only exception being MCs fruit salad, which gave our taste buds some small joy. 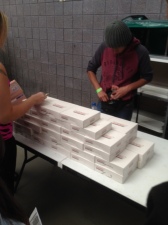 My biggest question was why serve packs of Krispy Crème donuts at a rock concert?  All around us were people with a huge beer in one hand and a box, yes a box, of sweet poison in the other – a good example of a major food company preying on people in order to improve their profit margin (don’t get me started on food companies and Big Pharma – my rants on this are just as passionate as MC’s).

To be honest it was actually quite sad to see; the state of the average Australian is terrible and the fact that being ‘overweight’ is now the social norm is an issue that needs some serious addressing (as a side note the whole obesity epidemic is a complex multi-factorial one, and not something that will be ‘fixed’ in the near future; however, unless many different parties come together to tackle it from a holistic perspective e.g. a financial, health, social and psychological perspective, it is not going to improve).

Now, lets get to the most important part of this blog – Jon, Jon Bon Jovi that is.  He is truly a seasoned performer and knows how to entertain an audience – I love him, and being the closet bogan from Hawke’s Bay that I am, it was awesome to see him perform.  I was a bit disappointed in the atmosphere of the crowd – where we were standing not many people were rocking out, but I blame the donuts for putting them all into a sugar fuelled stupor which robbed them of any ability to jump up and down…

So in all, the Bon Jovi experience was amazing, and I would certainly recommend getting to any of his concerts, even if it is to hear Livin’ on a Prayer (one of THE best songs ever produced), the food however, well, avoid food from these types of events at all costs!  It is just not worth putting that crap into your mouth!