So I’ve been talking about meat, as well as a few other things, attempting to be all educational, for 4 weeks now.

But there is more to meat and general sources of protein than just eating it.  For starters, most people should be eating a lot more protein in their diet.

But what sources should you use?

Well it’s up to the individual of course. I can’t make too many recommendations for vegetarians, because I find such massive holes in it as an idea in general. Just eat meat… That includes fish, poultry, something that was once living and moving about and has the perfect mix of nutrients for you as a human to live and be healthy. Remember the food chain… (We’re at the top).

Anyway, I would say that there are a few that are better than others, e.g. a meat like kangaroo is very lean and full of nutrients that are more readily digested than say pig, which contains quite a lot more fat (I’m not saying animal fat is a bad thing here. It’s not, but managing your amounts is important), and generally is harder and takes longer to break down the meat and extract the nutrients from the meat when we eat it.

However if you are looking for the best out of your meat then you need to know that there is much much more to it that how to cook it.

Everything that happens to the animal through it’s life up to how it is killed and what happens between then and it reaching your plate is crucial to not only the taste of the meat but what you get out of it- the nutritional value.

So, where to begin? Well, here are a few tips and key points when it comes to the history of the meat you’re going to eat. I will use beef as an example, but these guidelines carry over for most animals, with some differences from animal to animal and more obvious ones for things that fly and things that swim, or just lounge about on the beach.

When it comes to beef, most traditional British breeds are safe. One example is the now very common and increasingly popular Angus beef breed.

It is important to note however that if something says ‘Angus’ it doesn’t necessarily mean that meat will be 100% Angus beef. In the US for example the regulations there mean that ‘Angus’ only has to be a black coloured animal. Ludicrous. That results in dairy cows being pumped out in unhealthy ultra quick times to make ‘Angus’ steaks for the unwise and innocent consumer, not getting anywhere near the standard of meat they think they are.

In Australia the regulations are not government enforced but industry regulations and the ideal is the highest percentage possible, with 75% being the minimum for CAAB Certified Australian Angus Beef Pty Ltd. The same for New Zealand. In Briton an animal must be at least 50% Angus to be classified as such.

Then you want to know what the animal ate during its life.

The answer you’re searching for is GRASS (pasture fed).

Grain fed (and corn flakes, barley, soya beans etc) animals lack the nutrients that their grass fed cousins get from these empty carbohydrates. Grass on the other hand is a living plant with much higher nutritional value.

Remember how as humans if we eat shit our bodies become shit? Same thing. Makes pretty good sense right? Rhetorical question. But the answers an obvious YES. There is more to it in some cases but in general, that’s your rule of thumb.

Again, this might sound odd, but next ask (when I say ask I mean ask the butcher) what kind of life did the animal have. The more stress free the better the meat is for you and the tastier it is for your pellet.

So a farm, in a paddock where it could roam and do things it should do- walk, eat grass, moo, sleep, shit and frolic is what we want for the beats we are going to rely on to sustain our bodies. Not unhygienic, stressful and overcrowded feedlots that can produce something pleasantly called faecal dust. A dust that is created when too many cattle spend their time squashed into one area and they constantly stamp on their own crap, breaking it up and causing a rancid dust to form which they then breath in. YUM YUM…

This moves on to how the animal was killed and at what age.

The world of mass production usually means that a lot of cattle are fed hormones and antibiotics to get them bigger quicker and therefore ready to be slaughtered often at times around 12-14 months old. Most cattle should be about 20-30months, chilled and relaxed months of course.

Another safety here is if an animal is wild it can usually be assumed it had a pretty sweet life. No time in pens, travelling large distances in trucks to be killed, just doing its thing naturally every day. Like a tramp almost, without the immense stench, ‘open toed’ shoes and cheap (free/stolen) booze. They make tasty and nutrient dense meat. Wild animals that is, not tramps. They taste a bit like rubber, if you’re asking (ha, is he joking…).

A lot of people don’t want to get into the issue of how an animal is killed – just put the meat on my plate ready to eat thanks– but if the animal becomes anxious or stressed before it is killed, one that promotes the release of hormone adrenaline, the sugar supplies in their muscles deplete and lactic acid builds up. If this is for a prolonged period the meat will be dark and tough and can even smell slightly ‘off’. If they are killed in extreme pain the meat can feel a bit squeaky. Then you get less flavour and less nutrients out of the meat.

The next issue is how it is aged and for how long. You want the meat to be dry aged for at least 35days. This is crucial to ensure excess water evaporation as well as allowing certain enzymes to turn the mild flavour and springy texture of fresh meat into mouthfuls of intensely flavoured aged beef.

Ideally you’d buy the meat straight from the butcher without plastic packaging but that’s not entirely practical for most of us.

TRY and make sure that the meat you eat is of a good breed, age, ate grass, had a sweet gig down the ranch, was killed in a stress free way, dry aged for 35 days (longer for some cuts such as rump) and then when you get it home, ah, cook it well and enjoy the full flavour and nutrients you’re liable to get, instead of a bland, nutrient empty piece of ‘meat’.

Get some quality in ya…

Right, I’ve just got back from NZ (hence the slight delay in this posting. Apologies, if anyone apart from me cares…) and I’ve had a couple of local flavours injected into my belly. I’ll leave the second for next week as I seem to be becoming slightly obsessed with this blog and getting it out in a nice weekly interval seems important. Not really sure why.

Anyway, I had a good friends wedding in Queenstown on Friday. So arriving into town on Thursday and meeting up with a bunch of mates from around the world (including one Scott Phillips who made it in the nick of time after getting to Sydney airport on Wednesday and soon realising his passport has EXPIRED. For those of you who know him…!) I had done some asking around beforehand to see if I could get something more unique to NZ and my friend Ralphy had eagerly organised some venison for a BBQ at his place on Thursday. To say I was looking forward to this would be like saying The Pope doesn’t mind a bit of Jesus… Understatement.

Turns out Ralphy was the same. More so, perhaps, about a bunch of us tuning up for a night out, and Friday off work for him…

We arrive at their place out the back of Queenstown with an awesome view of the Shotover River down through the pine trees.

Ralphy is busy butchering some hind leg and dropping the cuts into a marinade he’s whipped up.

‘What’s in the marinade Ralphy?’ I say, “Special stuff. You tinker and add and tinker and then you have something that looks like, well, tar- you could catch some dinosaurs in there” he says without even thinking about it in typical Ralphy fashion. Awesome stuff.

I think it was a mixture of honey, soy sauce, garlic, salt and possibly a few unknown extras.

Ralphy had put on a spread for us and I was honoured to be given the tongs and reign on the BBQ and cook the venison.

During the cooking I was interested to learn the origin of the meat. Mark Wilson (Weaner), one of the hosts, had shot the Stag in the Southland high country over Xmas. So note: good quality and flavoursome meat coming our way…

And that it was.

Ralphy’s ‘Tar’ added a beautiful flavour to the meat that was tender and absolutely delicious.

I, personally, was struggling with the remnants of a stomach bug, but being as stubborn as I am; I downed a solid amount and enjoyed every last bite. Until slightly later that night perhaps…

Followed up with the ‘pudding’ Ralphy made in front of us, which was probably too alcoholic to be legally served in a licensed establishment.

I’ve eaten venison before. I remember living in Scotland playing rugby and some of the boys from my team bringing us in endless amounts to dine on through the week. None quite had the enjoyment of this occasion however.

Hard for a lot of you to get your hands on, but a trip to Queenstown is easy enough… And I can happily put you in touch with Ralphy. That alone is worth the trip, I can promise you that. 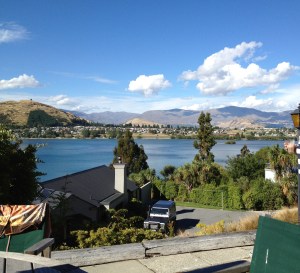 Many thanks this week go to Simon (Bundy) Ward for hosting me and his parents John and Sue for having me stay at their awesome batch (view attached), Mark (Weaner) Wilson and Fraser (Ralphy) Wilson for generously supplying the awesome meat and their flat to double as a restaurant. And HAWKSMOOR AT HOME by Huw Gott, Will Beckett & Richard Turner, a fantastic resource on meat and food in general.