Last week flew by (not literally) A holiday on Monday meant that absent of conscious awareness, it was Thursday in no time. I was training a client and she asked me about the goose from last week; that dense, stubborn big old bird. When she, seemingly naturally, asked “What are you cooking this week?”

An audible gasp left my now fallen open mouth “Arh! …wow, its Thursday already!” This wasn’t stressful so much as pure surprise. I had two different options in the freezer. However, I had been hoping to get a new option in for this week, but the sneaky Thursday afternoon meant that I was going to pull out one ‘I had prepared earlier’.

What was it to be?

A few weeks back I got myself together and filled my freezer with new meats. I’ve downed the camel and the big boned goose, so why not act like the All Blacks have in the last decade or so, and take down some Wallaby?

Now let me point out for you readers outside of the rugby union world- the All Blacks are the best team in world sport. That’s just a given. If you didn’t know this you should, and thankfully now do. They are from New Zealand, and do the haka; it’s pretty cool:

The Wallabies are from Australia, and are supposed to be pretty good, but in all reality are terrible, the laughing stock of world sport you might say. If the All Blacks were Michael Phelps, the Wallabies would be Eddy the Eel. Rubbish.

These, of course, are just my views…

So it would also suggest that the Wallaby is an Australian animal, and that is correct. A marsupial similar to  a small Kangaroo. However, more like the possum I ate earlier this year, the wallaby was actually introduced to certain parts of New Zealand many years ago. And also, much in the same way that us Kiwis see and treat the possum as a pest (which in New Zealand it is), so too the greedy little wallaby.

I personally have absolutely no problem with eating these little animals. They are protected in most of Australia apart from the island state of Tasmania, where they both are pests, just like in mighty New Zealand…

So to announce to an Aussie that you’re going to eat wallaby can raise an eyebrow or two, probably not as much as eating a possum, however. But for me, being a kiwi and clearly a huge fan of the the All Blacks- best professional sporting team of all time, with a winning percentage of 84% against all opposition– the appeal of eating said wallaby is all encompassing. After all, the Wallabies are out oldest foe, it just makes sense.

Where did the wallaby come from?

Thankfully for me, Tasmania sees the Wallaby as a pest, and it’s locals have been harvesting them for their meat for thousands of years. That’s where these Wallaby fillets came from. However, it’s not the only place. Like I said, in some areas in New Zealand there are plenty of wallabies bouncing around. They tend to be in one main area where they are often hunted by farmers and controlled as pests for stripping local farm land.

I did a bit of reading up on wallaby meat and some sources described it as the ‘veal of kangaroo’. If you haven’t had kangaroo, then check out my Roo dish and post from earlier this year. It is quite rich and ‘gamey’, like venison almost. It can be beautiful, however, it can also be a bit too much. So to read that this was essentially a mild version boded well.

How does one cook wallaby fillet?

This was a beautifully simple thing with this wallaby; eye fillet is generally the tenderest part of any animal. Therefore making it a great candidate to quick fry in a hot pan with nothing more than some salt and pepper. 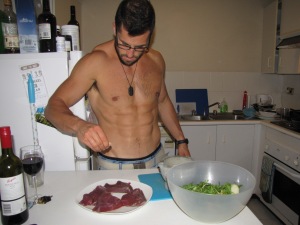 This is what I did. After the effort that was slaving over the goose last week, calling this a welcome change is only scratching the surface of understating it. I love my family and all, but that goose meal was hard work! Who sweats cutting up meat?

So, I decided on a quick and easy meal consisting of: Tasmanian grass-fed wallaby fillet and garlic mushrooms, with duck fat roasted golden sweet potato and simple salad of rocket, pear, parmesan and roasted mixed nuts. Even Mr Bean could nail this.

Actually the massive food geek in me also added a couple of homemade sundried tomatoes I had prepared last weekend. I say sundried, it was actually slowly done over a few hours in the oven. Very easy and crazy good! Stay tuned for the recipe…

I brought the meat to room temperature, patted it dry and seasoned it with salt and a little cracked pepper. A hot pan did the job on this as some butter and garlic made a few accompanying mushrooms taste and smell like what I’m sure heaven/paradise/whatever utopia you believe in, smells like. If you like garlicky, buttery mushrooms that is. Thanks to NN for this addition.

How was the wallaby?

Very gladly for me, this meat was quite simply awesome. Like when a tender Wallaby team is taken apart by a superior All Black side; this was beautiful, extremely satisfying and left me wanting more and more. Oh I do love to ram a point home sometimes… 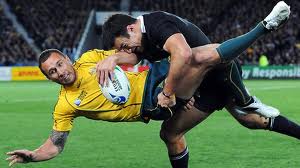 The meat was as described online; faintly similar to kangaroo, but much milder and consequently loads nicer. The mushrooms added to the meat, as they would to anything, in my opinion. The salad and kumara were simple, yet great accompaniments to the meat. 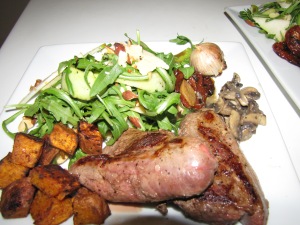 I could easily and happily eat this weekly. In fact due to my amazing foresight I had bought 1 kilo of this wallaby fillet, so it just served as my Saturday morning breakfast and will most likely appear around lunch time also.

I’ve also just had a word to my dad about this meat. He deals with farmers on a daily basis, and these are by in large the sole farmers in New Zealand that have the problem of wallabies as pests and will shoot them to protect their livestock and feed. If they are not eating these animals they need to start immediately. Not only because that is a disgraceful waste of life, but also because it is cutting off your greedy nose to spite you’re smarmy face. Killing and wasting what is a beautiful meat just so that your more prized meat doesn’t have to share its home and playground seems, not only wasteful, but counter intuitive.

Other people (that’s you guys) do it too! Not only is it a great tasting meat, but it is a serious super food when it comes to nutritional bang for your eating buck. It is high in lean protein, as well as Conjugated Linoleic Acid (CLA) which is a fatty acid that has been shown to have powerful health benefits including controlling insulin and with it increased fat loss while promoting lean muscle gains. Wallaby meat is also a great source of other crucial vitamins and minerals such as iron, zinc, B vitamins. Plus this wild meat, as with most wild meat, is not only nutrient dense, but bio available, meaning its nutrients are more readily digested. All great things for getting healthy, putting on lean muscle and into awesome shape.

Readers in the UK can also source wallaby from various sources as certain breads were introduced early last century. Go get some. Outside of NZ/Australia/UK, ahh… try google. I hear it goes ok for answers…

And that my faithful readers is week 40- wallaby fillet. Another boomer and one that may just be climbing up my top rated list. Check that out later this week.

Also, make sure you get over to my facebook page and Tweet at me. You can communicate with me daily and also make use of my regular posts on all things training, nutrition, health and of course meat, including some awesome recipes!

Want to work with me? Visit www.mikecampbelltraining.com for all the details.

Big thanks to everyone for reading, and an even bigger one to anyone who shares this post around…