I know that I’m so close to completing this challenge. I’m acutely aware of it with every one of my senses.

Ok I can’t smell it. Or hear it. Actually I can’t taste it either. It’s more like I can see it and feel it. Yeah, two of my senses. Well, apart from my sixth sense, but that being my Batman sense, that was all over this from the beginning.

So what do we take from that ramble? Well, I’m so close to the end, yet somehow this week I’ve felt so far away. I have so much to do between now and then. First off is finishing the draft manuscript for my book. Then more specifically for this challenge is get hold of all the bloody meats.

You’d think I’d have those organised, but I don’t. I’m leaving it until the eleventh hour, as it were. Not by choice, I just think I’ve exhausted all my ‘phoning around for random meats’. Of course there are options, but the last thing I want to do is bring the people (that’s you and the creepy guy on the train reading over your shoulder) a boring meat adventure.

Alas, this may be somewhat that. I’ll let you decide…

With the task of conjuring up a new meat and getting my hands on it, I was a bit down about the whole thing to be honest. (Almost sick of it). But my more sensible brain butts in and says (in an accent similar to Nessa from ‘Gavin and Stacey’) “Oi’ Mike, stop being a dick, you’ve only got 5 weeks to go man. You’re coming off the bend and about to hit the home straight. Pull finger and finish this thing with a bang.” After all, one of the whole reasons for doing this challenge is to set an example. To do something that is most definitely an ordeal, because a lot of the things we take on in life aren’t easy. They don’t just happen for us, we have to dig our heals in and put in a solid amount of hard work and make some real fucken sacrifices.

For many of the people who read this, many of my clients and the people I talk to everyday who ask for my help and advice one of the main challenges is getting in shape, losing body fat, eating well and sticking to it. Maintaining a lifestyle that is not only healthy, but manageable is incredibly hard for some people. For me it’s not that difficult because I value it so highly. So while it’s all well and good for me to say “Stop eating such crap!” it can miss the mark because it may not carry much weight.  Getting well out of my comfort zone, sticking to an entire 52 week challenge (especially when it’s hard and I can’t be arsed) I can not only empathise, but hopefully provide inspiration and a yardstick for which to follow suit.

Hence why I swallowed my “I just want to be finished with this!” thoughts got myself out of bed early on Saturday morning and down to the Sydney Fish Markets to purchase what I think (and hope) will be the final entry from the water.

It was time for the poor Australian version of a couple of Kiwi classics:

Or as they are called pretty much everywhere else in the English speaking world (which I’m pretty sure is everywhere isn’t it?):

It was time for a Meat Mike Campbell Random Seafood Extravaganza. Which is to say- it was time for me to source the only two things seemingly left for me to source in Australia. Legally. For a white guy. Short of heading to the Tores Straight off Queensland’s northern Cape York and going out with some locals and catching some Dugong or Green Turtle. This off course would be incredibly entrenched in moral and ethical issues. A story for another blog perhaps.

The ‘Mermaid of the see’: Dugong

In New Zealand Abalone are called Paua and Sea Urchin are called Kina. In much the same why that Tores Straight Islanders have hunted Dugongs and Green Turtles for centuries, so have Paua and Kina by the Maori. This is where NN’s influence came in. She grew up eating these two treats of the sea whereas I had never tried paua until I was in my mid 20s and sea urchin until earlier this year. When it comes to these two meats, one a very large sea snail and one an Echinoidea, I am what you would call a relative schoolboy. I’ve got no idea.

I’ve tried paua in the form of a Paua Pattie which is common in New Zealand and I’ve tried sea urchin sashimi at a very nice Japanese restaurant here in Sydney. I would say I was underwhelmed at best with both. So this didn’t exactly shape up to have the kind of excitement I spewed forth last week with the world’s best pork ribs (just saying).

I decided to simply buy some sashimi options so all I had to do was eat it. Then NN weighed in and convinced me to do her favourite paua recipe Creamy paua. I caved.

I purchased a pack of fresh sea urchin sashimi and a local Australian Green Lipped Abalone, which evidently looks a bit different to the Paua I’m used to seeing back home. And kind of like an alien:

I got them home, busted out some book writing and worked up a hunger, I suppose you’d call it. An interest might be better suited as I wasn’t exactly chomping at the bit. I put the kina in a bowl and some soy sauce in another, grabbed some chops sticks for authenticity and ‘dug in’:

I did not like the result. According to my in depth research (google) they should be yellow/gold to be grade A. This was more a dirty yellow indicating below grade A. How far down the alphabet exactly I can’t be sure, but it soon became R for rubbish. I threw it and hoped for better things with the abalone.

How to do ‘Creamy Paua’:

Once I’d removed what looked like its guts and waste I followed NN’s instructions of slicing very thin. I was alone on this venture so a phone call to check I had it sorted was needed. This thing was slipping all over the show and needed rinsing a couple of times to get the kitchen floor seasoning off it. 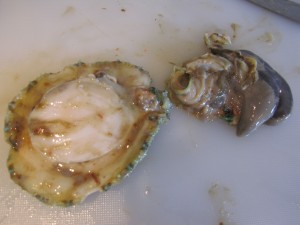 I cooked some chopped spring shallots and garlic in butter over a medium heat, then added the sliced abalone and some freshly fried mushrooms to the pan. The abalone took on a familiar reaction, that of the pointless python. I quickly shook off that memory and added the cream, let it mix and cook for a couple of minutes.

Once the sauce was reduced slightly I dished up and ‘dug in’ again.

What did I think?

What I think and what I’ve long thought about abalone, or paua, is that it’s over rated, purely my opinion of course. However, the tough thing with this, apart from the meat- that was tough- was the taste was essentially of creamy mushrooms. I couldn’t really taste the abalone.

Once my jaw had worked through the tough textured dish I felt a couple of things:

In the end that’s it really, two random meats done together!

Now one thing to note about ‘kina’ is that it’s thought of as the row of the sea urchin, it is in fact it’s gonads. So that takes my yearly gonad eating total to two for this challenge. Sheesh. In terms of nutritional information it is a good source of omega 3 fatty acids and a pretty good amount of protein for gonads.

So suffice to say if you’re looking to mix up your meats and get new protein sources, as well as pack in some much needed nutrition for a healthy sexy body then give these two a try.

Just make sure the sea urchin is fresh and golden and the abalone is, ah, fresh to I suppose. My expertise hasn’t really risen on this one…

Oh yeah, I appeared in a magazine and on the cover this week. Here’s a couple of the shots: 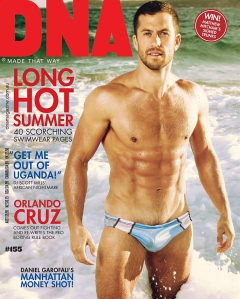 DNA is Australia’s biggest gay men’s lifestyle magazine, and a great team of people to work with might I add. Big thanks to the editior Andrew and to the awesome photographer Simon Le. Legends! Suffice to say I’ve had some great feedback and of course plenty of shit from my mates. Gotta love’m… NN my amazing and very supportive girlfriend doesn’t seem to mind though. It is weird seeing posters of yourself all over shop fronts, I’ll tell you that much.

What do you think of the pictures? Remember to come and say hi or ask me any questions on my facebook page or twitter, or simply comment below. I love hearing from you.