Where do I begin

As 2012 progresses and the weeks march on I continue to search out different meats to source, cook and most importantly- eat.

Sometimes this has gone well. Extremely well. Sometimes, however, they have not. At all.
Week 32 has become the marker for the latter. It saw me in New York with access to the over the top United States for my meat. I asked around in advance, emailed butchers, mates, read online forums and even attempted to get some Moose from north of the border in Canada.
In the end it came down to a website that delivers throughout the States and has a large and eclectic selection, most of which are understandably astronomical in price.
However, one meat stuck out for me. It was something I’d had on the list initially but was unsure about its availability in Straya (Australia) so this chance was too good to pass up. Plus NN was seriously not keen on me eating a turtle…
What did I have?
I would hope the clue is in the title- I ate some snake. Python to be precise.
Just as the Monty Python boys said: “And now for something completely different”. This was a very different meat experience and as mentioned already, a pretty underwhelming one that went so poorly I actually find myself saying “F**k you snake!” each time I think about it. 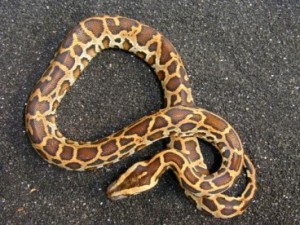 F**k you snake!
So what happened?
Well, I arrived in New York and ordered what I thought was Rattlesnake. Upon arrival I found that what I had actually ordered was Python. Not only that but it had come from Vietnam! It had almost travelled as far as I have!
Just like Stevie Wonder, I did not see that coming.
Anyway, I thawed it out with the intention of cooking sometime the next day. However, the next day started later than usual (a lot later) after a dinner that went on long after the restaurant closed the night before. So I promptly started searching online for guidance in cooking python.
What I found was a mixed bag, but a large consensus on the meat being tough and needing care.
Now, I’m a stubborn person at the best of times, so talk of detailed recipes involving poaching and numerous other stages full of ingredients fell on blind eyes (I think that works). I decided that I’ll treat this like the other reptile I’ve had this year; crocodile. They must be similar…
So I shot round the road to the Whole Foods Market and grabbed a few supplies. If you live in the US or are visiting then I can strongly recommend this place. Great quality food and great selection.
I grabbed some garlic, a lime and a small salad from the make your own salad bar, and headed back to my mate Trouny’s place.

I prepared a marinade of olive oil, the juice of the lime, finely chopped garlic, a dash of hot chilli sauce, salt and pepper. I left it for a couple of hours while I enjoyed the New York heat, Trouny’s roof top loungers and pool with my travel companions. Not a day to be trouncing around the city…
What went so wrong?
I cooked it, that’s what! As with the crocodile from week 2, I got the pan hot and quick fried the python meat. That was the plan anyway. As soon as it hit the pan it shrunk and curled up. I instantly knew this was going to be a bad day for Meat Mike Campbell… And for the ambitious python eaters out there… 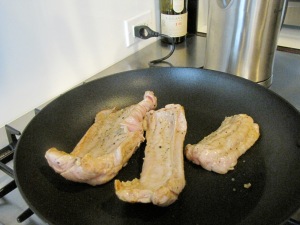 I flipped it a few times to try and negate the curling and get a quick even heat throughout. At this point it was irrelevant what I did really. I hadn’t poached it- and I think that was the key. 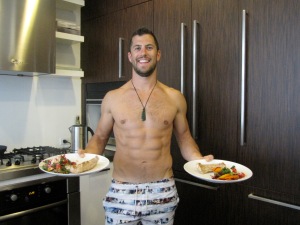 How was it?
You may remember a few weeks back I described the potential for the squid meat to turn into something resembling a waterproof overshoe, well it didn’t and was beautiful. This did exactly that. I can only describe this meat as being more rubbery than rubber.
If you served me up the sole of an old tennis shoe I think I may have had more luck cutting through it and subsequently chewing it! Wow this was tough!

Did I eat any?
I certainly tried! Like I said, I’m stubborn. So after travelling around the world and paying over $70 for this python meat to arrive by FedEx I was most definitely going to do my best.
Not even a sharpe knife could make light work of it so my molars stood little chance.
I had the bigger of the pieces which was a little undercooked also. NN had the smaller piece but still ran into the same problem- effectively trying to eat a tyre. Bear Grylls may get this stuff down in remote locations but I doubt he could have made better headway with ‘Jake the Snake Roberts’ as I’m calling this week’s meat.

I battled through a few small mouthfuls while my jaw hated every second of it and then Jake the Snake joined the contents of Trouny’s rubbish bin, along with my ego…
A learning curve…
At least I hope so. However, I fear these situations are much easier in hindsight and my stubbornness can prevail more often than not, preventing me from enjoying something I should be.
This left me dejected and annoyed. But, I know there’s always next week and if I’m ever keen enough, plenty more opportunity to try cooking python meat again. In Vietnam at least.
I currently sit on a plane writing this, and even though it was only a couple of days ago, I’ve done a lot since and it feels like a distant memory. Well, I may be pushing it far to the back of my mind, but either way it’s done. Meat Mike Campbell has hit The Big Apple and failed miserably. Was it worse than the Emu fail? Yes definitely.
But, I sourced, cooked and ‘ate’ some Python. That’s pretty cool, I think.
I have also learnt this week that  a snake is not like a crocodile which lounges around a lot. A snake’s meat is from heavily used muscles. Each one essentially working to move about as well as constricting often in order to cling to trees/unwilling tourists etc. 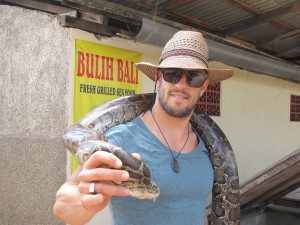 Not something that should be cooked quickly but slowly and gently, say poaching…
Another time maybe…
I return to Sydney this week with normality a welcome oasis, and hopefully a new meat that will bring back my confidence and with it a decent meal!
Until then, happy and healthy eating. Train hard and often and like I plan on doing very soon- get plenty of quality sleep!
Special thank this week to the one ad only James Trounson- getting it done! Chur bro!
Mike