It’s currently before 6am on Saturday morning. Ridiculous.

I do get up around 5am throughout the week normally, however, I feel this time is reserved on weekends for early flights, monster nights, swimmers and the land of nod.

Not today, I’ve got to get this post written so I can get back into my book. Time is very much of the essence, so I am currently using any I have spare to write. And generally be anti-social.

Not in a ‘drunken football hooligan’ kind of way, just sitting in my lounge room with my laptop infront of me, my head phones in and a cup of tea next to me.

So the reason I’m up now is this week’s meat- week 49!! Yikes, that means 3 to go after this, which isn’t really any explosive news, considering wherever you look at the moment Xmas is in your face. More so to me is the fact that next week marks half a century of different meats.

To me, this has come around very quickly. It doesn’t feel that long ago that I was sitting on a flight home from New Zealand for Xmas last year writing my first ever post. Doesn’t it feel like 2012 has been an especially rapid one? Come on, let’s all think about how quickly this year has gone…

Why? Because this week’s meat was anything but rapid. We’ve had the week the hare roasted at tortoise like speeds. I’ve mentioned the Three Toed Tree Sloth from time to time, more for amusement that anything else. I didn’t eat one.

However, this week could hardly get slower.

For this week I ate snails. Heaps of them.

About 12-15 of them actually. Not as many as the whitebait, but still, that’s quite a few of the one animal.

For this challenge I had put in place a, albeit very tentative, statute ruling out bugs of any kind. I just didn’t really think of is as a worthy meat. Then it became the last few weeks of the year all of a sudden (see above) and I was short on options. Originally for this week I was lining up a crab. However, NN made the wise suggestion that even though I may have never attempted cooking a crab before, it’s much the same as lobster and won’t really provide much in the way of entertaining reading.

Unless of course I made it good reading, I think she forgot that bit for a second, but that’s ok, I still love her even though she may have temporarily forgotten my writing power.

However, I have to admit, the suggestion to swap crab for snails was a good one from her. On one hand it brought me to the realisation that I was preventing myself from doing bugs, yet here I was about to do a big sea based bug in the crab. Not only that, but I had already done other bugs from the ocean; prawns and lobster in particular.

So it was decided, snails would make the menu.

Now I’ve mentioned before that I can be a stubborn man. Sometimes this is strong willed resoluteness. Other times it’s purely inflexible arsehole for little reason.

The later is also partly why I had resisted eating snails up to this point. Everyone who had mentioned them, and that’s been many, invariably came back to the standard French style of cooking them in garlic butter. Now don’t get me wrong, I love garlic and I love butter, and I most definitely like the two combined, however, to me the reports that the snails end up only tasting like said garlicky butter seemed entirely pointless to me. So I stubbornly said “Yeah-na…”.

Until NN put it so succinctly that is. I still kept my stubbornness intact though, as I found a beautiful tomato snail recipe from Helen whom I bought my 2 dozen snails from at www.snails.com.au.

The name says it all in that URL really doesn’t it (That’s a short and fancy term for website for the older generation). These guys do snails, and Helen sent me 2 dozen of her best. I hope anyway.

I decided to ignore all the French influence that I’ve had this year, which with Tom and Vero at The Butcher And The Chef has actually been quite considerable, and push on with this tomato recipe. 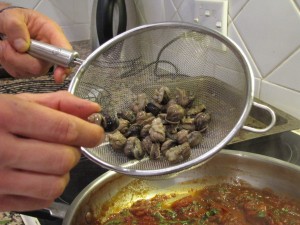 It was about half way through making it that it dawned on me- these snails are just going to taste like this tomato sauce in the exact same way they normally taste like the heavenly combination of garlic and butter, hence rendering my reasoning for the tomato recipe pointless.

Still, the sauce was looking, smelling and tasting pretty dam good. It consisted of:

This was pretty easy and if you like tomato/red wine/garlic/basil combo then you’ll know how good this was looking. Sans the snails perhaps, like me and NN too.

I dished up into small bowls, took the obligatory photo (and yes, it was hot rendering me shirtless, however I do normally cook this way, just to stop those questions for another week…)

So, how were the tomato based snails?

I found it ironic that these snails, or certainly their more ‘wild’ brethren may very well have spent their lives cruising around, albeit very slowly, vine ripening tomatoes. And here they were being dished up to Meat Mike Campbell on their last journey. Which was no doubt faster than any of their previous journeys.

I loved the tomato sauce and so did NN. The snails on the other hand were definitely detectible. They had a squishiness to them that you could feel on the tongue, but also a chewiness that took some getting through.

I got through mine and some of NN’s before declaring that even though the dish was essentially a winner, due solely to the sauce, snails won’t be making an appearance again.

Unless I’m in a Bear Grylls like survival situation in someone’s backyard. In which case I doubt I’ll have the requisite accompanying ingredients to make the delightful sauce…

However, it turns out that snails are a fantastic source of nutrition. Of course they’re only small, and you’ll have to eat a few to benefit, but that’s ok- it turns out people breed snails for other people to eat- huh?! They contain about 17% protein and a good serving ratio of iron, potassium, phosphorus, selenium, magnesium and niacin. All crucial ingredients in your mission for health and a lean and defined body that may just show off your six-pack. Get some snail nutrition in ya today!

So, I’ve sourced, cooked and eaten snails. That makes 49 weeks done. That means I’m one step closer to not getting up stupid early for a Saturday and writing a blog post about a new meat. However, it doesn’t mean I won’t as we move into 2013, I’ll still be searching out new and wonderful meats to try. I know there’s more out there. Elk, reindeer, moose, panda, antelope, whale, quinea pig, bear, alligator, bison, tiger, rhino, HUMAN.

Which ones am I joking about…………

Better go write some of my book. See you all soon. Remember to comment below, if like, you have comments. And make your way over to my facebook and twitter page where you can chat with me more regularly and stay updated on all things Meat Mike Campbell.