Christmas in the air. Don’t you know?

It’s not just on the tree, in the shops, on every television advert going, everyone lips, every harbour boat cruise that goes past my house blasting carols, it’s also very much in the air. I know this because people keep telling me.

“Christmas is in the air”, they say. Seems quite abstract to me really. Do they mean is smells like Christmas? Or like a sandstorm when there’s heaps of sand in the air?

I know where Christmas is, it’s in Santa’s pants, and his beard and his jolly old laugh. Oh, and his sleigh, it’s definitely in there. 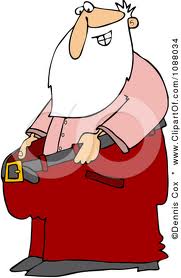 Anyway, I’m rambling. I must have just sat down to write about this week’s meat after having eaten it. That tends to happen.

There is a point, of course. That being CHRISTMAS IS IN THE AIR. If you missed it.

Because of this fact I got in the swing of things for this week and prepared a Christmas-ish feast. Why ish? Because I’ve never had this at Christmas before, but I’ve heard it mentioned HEAPS in songs. Well one particular song. It goes something like this:

For some reason I can’t embed this video, but make sure you watch it, it’s hilarious!

Did that give it away..?

I did a partridge, and I made a bloody pear tree!! 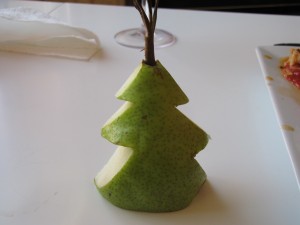 I have to say, how hilarious is that clip?! It is harsh against poor old Jimmy and his stutter, but it’s only a little made up humour. Just like my outstanding visual pun with the pear. Killing it!

Now not only did I get organised to head into the week leading up to Christmas with a special meat, but I did this ages ago! When I did my dodgy mission out west to pick up the ostrich I also got them to throw in a couple of partridges. Which was lucky because they were the only folks I could track down that actually had them. So I saved them up in the freezer waiting for the right time. 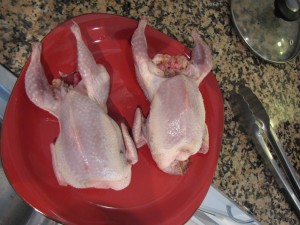 Then it felt right. Like I could smell something in the air. Christmas maybe. Yeah, Christmas was in the air, so it was well and truly time to get these little birds out and ready to become meat number

A busy week of writing, course, work and Christmas parties was enveloping me, so luckily I figured this out and when Wednesday rolled around it was time to introduce these partridges to their new pear tree.

How does one do partridge?

One goes straight to the internet. In hindsight I wish I’d consulted my meat cookbooks first, but where they are in the new flat I kind of forget about them. Oops. Next time…

So I found a recipe that included cinnamon, wine, tomato, honey and garlic. This sounded like a weird combo, but all ingredients I like very much, so why not?!

I had already decided to make a pear tree in the form of a modified Waldorf salad with pear, rocket, parmesan and roasted pine nuts. This would be my eating ‘pear tree’. 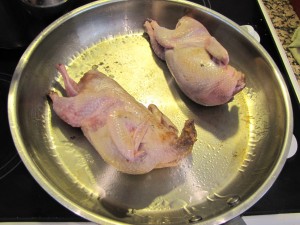 This recipe called for browning the birds in the pan then adding in the ingredients, covering and simmering for a time. Because I don’t have a deep pan I just used the humongous stock pot I had to buy for the goat curry recipe earlier this year.

This worked well; soon the birds were cooking and soaking up the flavour of the various additions.

On the side I prepared some black quinoa in chicken stock and added some chopped dates, smashed almonds and lemon zest. 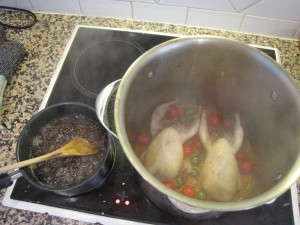 Both NN and I were pretty damn hungry when it came to eating time, I even caught her desperately searching the fridge for sustenance as I had confirmed its readiness in just 20 minutes.

We got there, thankfully, and sat down to what smelled divine and looked a lot like Christmas! 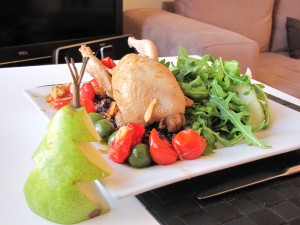 Yes, I had made a pear into a tree to join the partridge. Now all of Jimmy’s effort just to spit out that first line wasn’t wasted! 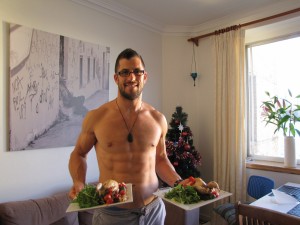 Stuff Jimmy, how was the partridge and the pear tree?

The bird was very tender, incredibly juicy and pretty damn delicious. The flavours were a strange mix, yet it was beautiful. The quinoa was awesome, especially when soaking up the sauce and the salad, or pear tree, was a simple yet delicate addition.

I did love this meal, however, I have to say, the bird did just seem pretty similar to chicken except for the fact that it is smaller and much more of a pain in the arse to eat! If you have checked out the quails (yes plural) I ate earlier this year, then you’ll know what I mean when I say fiddly!

It prompted me to reflect on all the birds I’ve done for this challenge this year; duck, quail, chicken, guinea fowl, pheasant, goose, pigeon, emu, ostrich, pea hen and now this. And when it boils down to it, it really does seem like we nailed it when we domesticated chickens as our number one poultry provider. In terms of meat yield and ease of eating and stripping the meat off, the chicken has it down! A leader among birds. Feathers down, ahhhh…

Although in saying that, it was a nice change to the bigger bird and of course provides some wonderful nutrition. Clearly a quality meat and protein source. As well as a great source of iron, phosphorus, selenium and other vital minerals and vitamins. And, it’s a Christmas meat too apparently so why not have some of this little guy… 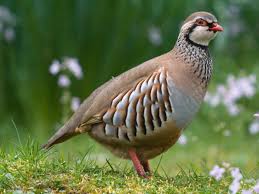 I would definitely recommend trying some partridges, and I think cooking this way, on the stove top covered was a great idea, allowing the meat to stay tender and juicy, as opposed to some other birds that I’ve roasted and the timing becomes a real issue.

The main thing that I’m taking out of this meat was that this was week 50! Half a century reached and ticked off in tasty style. Of course Christmas did make an appearance, floating in on the air through the window and my puns became 3D with an amazingly crafted pear tree. 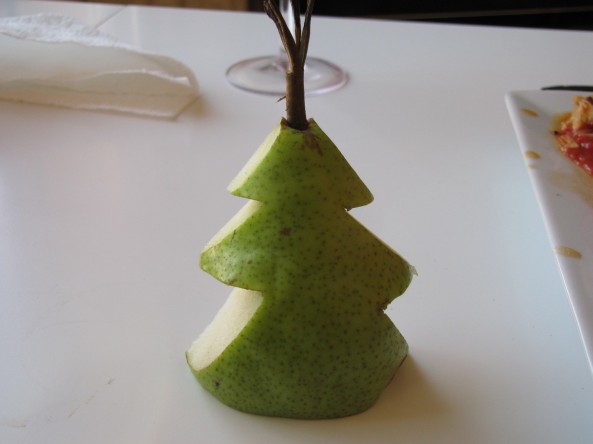 Now it only leaves two weeks, the one leading into Christmas and the one after. I’m not sure I’ll cover 12 meats this Christmas, but it can’t hurt to try…

What on earth is there left to do?

Who thought months ago that I would never reach this point successfully?

How many different meat suppliers can one man desperately speak to?

Is the world going to end this week?

These are all valid questions at this time of the year. Not just any old year of course, just Twenty12.

MEAT MIKE CAMPBELL vs THE MAYANS