To type the letters that make up the title of my draft document for this post is quite sobering.

That’s due in part to the second miniature bottle of wine I’ve just cracked on the flight home to New Zealand for Christmas. However, the majority of that instant sobriety is due to the characters:

51 weeks seem to have flown by. It really doesn’t seem long ago I was sitting in the same position I am now, perhaps sans the vino, and penning my very first post as I flew from New Zealand to Sydney after Christmas 2011. I was an anxious, unsure, yet still excited Mike then. Meat Mike Campbell was in its infancy and I wrote the best part of the post on my iPhone with my elbows tucked in at my side while having an eternal arm rest wrestle with the grumpy fat dudes next to me.

Now I’m on the cusp of completing what has easily been the biggest challenge of my life. I say that without a great deal of reflection over my life, two bottles of wine in remember…

I can say that I am very excited about getting into week 52, The Finale Spectacularrrrrr (said in a Mexican accent), writing that post and the subsequent completion of a ridiculous, awesome, fun, testing, thrilling, educating and expanding 52 weeks of meaty exploits.

I was about to get deep, I even started an emotional sentence just now and deleted it for this one. In the same way an adolescent male winds up his first sexual encounter, it seems a bit premature to start getting fully into my wrap up of this year. So, while I’m many feet up in the air and heading for home, I’ll race against my laptop battery and the announcement to put it away (my laptop, not my, ah, anything else…) and get this close to publishable.

Week 51 of 2012- a week that the world is supposed to come to an end. The Mayan’s said so, apparently. In fact as I type, it is the day suspected. The day. Nothing has happened. Yet. Although I have just been delivered more biersticks, nuts and wine, so who knows where this flight will go?

The slightly disappointing thing for me coming into this week was the meat. Number 51- the penultimate meat– ideally a boomer, something to create conversation and interest. I had a couple of things on the distant horizon, three in fact.

The first was Chamois, a wild European mountain goat/antelope type animal that is wild in New Zealand and controlled for numbers just like the Thar that still sits at number 1 on my top ten list from this entire year. However, it was not to be. Poor hunting conditions and bad timing resulted in the only chamois I saw being a cloth to wax the car. Not edible meat.

Number two was a lizard. Possibly Goanna or Blue Tongue. Both of these were taking shape from Riki, an Aboriginal guy I started chatting to a week or so ago. However, in the end it became too hard to talk to the right people and get the ‘OK’ by whoever needed to give it. I was pumped for this and really wanted to both eat some goanna and tell the story of indigenous food in Australia, or Straya. Sadly it also didn’t work out.

Third was, well, a bit racy and taboo… Dad lives in the country and his pet cat had been getting attacked and beaten up by a ferial wild cat. He was determined to catch it in order to save poor Savie from more torment. My mind kicked into over drive, whilst facing desperation on the meat front, and thought of an amazingly touchy and controversial week 51- Wild cat! How good would that have been?! Not a pet, but a wild animal that was fighting and picking on an innocent little pet animal. It made perfect, albeit slightly twisted, sense to me. Alas, again no luck. Perhaps a good thing…

Regardless of those outcomes I remembered that Tom, my reliable butcher, had one more option for me. 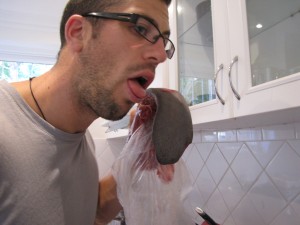 What a disgusting and weird looking thing! However, some bloody great big ox had kindly provided me with its tongue and my meat number 51, so I was sure as hell going to eat it!

I went to searching my cook books for recipes and found some common ground with cooked and then cooled tongue. So I got busy cooking the tongue in a stock for a few hours. Once this had simmered gently I let it cool in its stocky liquid until cold enough to make a surgical like incision and remove the skin. That in itself seems like a weird concept. 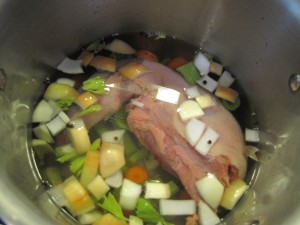 However, I had it peeled, in the fridge and ready for some eating the following day. 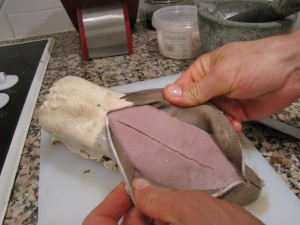 Once the time came I removed from the fridge and its stock, dried it and cut up the tongue into small chunks ready to be added to a lovely salad I had made. 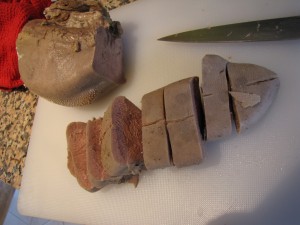 Now at this point I have to say, I was starving! However, I also had the inkling that this wasn’t going to be a ‘to die for’ meal, or anything even approaching that. So I did what I can do pretty well at on the eating front times, and I got stuck right in!

Soon I’d devoured the best part of a tongue and salad. I was satisfied, yet not overly enthused at the meal I’d just consumed. The flavour of the tongue had a slight offal taste to it. It wasn’t terrible by any stretch, but it didn’t have me salivating already at the thought of having it again. I think the best way to sum it up was- agggghhhhh…. whilst waving the hand side to side

I won’t be racing back to have ox tongue again that’s for sure. However, I did finish the meal and think ‘Tick! Another one down and only one to go!’ probably shows where I’m at with this challenge to be honest. I’m simultaneously close to the end and my tether. Well, for mediocre meats that require relative work to source and cook.

Tongue certainly has some great nutritional benefits, and every animal walking around has one, so why not use them right?! A waste not to use every part, especially for a healthy balanced diet and sustainability. It’s just that I might not indulge that much myself… Just yet.

However, never fear!! Because I’m now heading into Christmas, which mean this week, number 51, is finishing and the FINAL WEEK- NUMBER 52- IS COMING ROUND THE BEND AND WAITING TO BE FUCKING DOMINATED BY YOURS TRULY!

Next week is exciting, it’s also going to be a week for the ridiculous, and I simply cannot wait.

If I were you, I’d forget about that day called Christmas, even the one celebrating the world’s greatest boxers after it and hold onto your seat with anticipation for what will be my most outlandish and meat purist satisfying week yet- the last, the completion, the bingo, the Yatzee, the god damn jackpot of this challenge.­

For, next week, I will eat the meat from 3 animals!!

After all as the saying goes- we’re not here to fuck spiders- I may as well go out in style, and I intend on doing just that!

Have an awesome Christmas, Hanukkah, Festivus, holiday period, break, or whatever you want to call it. Just make sure that you satisfy whatever ‘powers that be’ need satisfying, so you can enjoy the pants off week 52 with me! Come and say hi on facebook and twitter, or comment below- I love hearing from you!

And now to stow away my tray table and switch off. This is your captain speaking…