After the relative disaster that was the emu last week, you wouldn’t be wrong in thinking I came into this week slightly apprehensive about my next meat challenge.

Sure I cook meat all the time and generally do a bang up job, if I do say so myself, but something like that, especially when you broadcast it to many, can take a big chunk of your confidence.

One thing going for me was the fact that it was always going to difficult to turn out a finished product that unattractive again, or worse. However, my poise had been knocked, and this incident was just flat out frustrating. Nevertheless, in between cooking the emu and this week’s meat I did prepare some beautiful meals and some amazing meat. So when the time came, I was back on the confidence train.

What did I do and where did I get it?

Well, since you asked, I’ll tell you… The other meals and meats that I cooked post the emu were certainly redeemers. It may be biased by the purchasing process, but I spent some time last weekend in the Blue Mountains of NSW and visited one of the local growers markets.

For me, someone who loves and values quality food, talking to the people that actually grow and farm that food is a real thrill, if slightly, or perhaps even extremely, geeky. It is so important to know the source of what you’re eating and by what practices it was grown or raised. When speaking to a farmer about their passion- providing top quality food- you get this. It may sound boring and unnecessary, but food is the one of the major keys to complete health and preventing disease. Who wants to see a doctor to treat something? You can prevent this with exceptional nutrition and a simple but complete daily life.

Take home point: get to know where your food comes from and how it was grown/farmed.

OK to the business of this week’s meat. So I wandered through the market, in the bitter cold mind, and picked up some baby carrots, tomatoes, avocados, sweet potato, zucchini, mushrooms, strawberries and capsicums as well as some amazing duck breasts, juicy Saltbush lamb roasts, and the clincher of the trip- some Asian Water Buffalo steaks.

I’m sure they just love dealing with ‘city folk’ out there for the weekend, especially ones that ask endless questions about their product and the breed of animals that produced this meat… I hope so, because they certainly got it! To their credit though, the team at Ausbuff Stuff were extremely helpful and enthusiastic about their product, making the purchase of some of their meat a no brainer. Don’t get opportunities like that every day!

So, on arrival back in Sydney I roasted the lamb which was succulent and delicious. The following day I had the duck breasts, following pretty close to the recipe used in the first week of this blog: ‘Taming the beast’.

The result was similar to that night- simply beautiful. This now had me in a much more positive temperament and ready to dominate some New York Buffalo steaks for NN and I the following night.

She was in relative disarray after the emu and was going to take some winning over with anothernew meat. So I set the scene… and got roped into babysitting my 6 month old niece Poppy while my sister and brother-in-law had ‘date night’. I say babysitting; we were merely in the house while she slept soundly growing her first tooth.

It had the potential to be a howling baby disaster zone, in which I had to try and cook this week’s meat, most definitely striving not to f**k it up like last week, whilst also reassuring said howler and trying my best not to call her parents and disturb their first night alone since Poppy was born. Luckily for the meat and NN’s faith in my experimental meat cooking, Poppy was an absolute star, in that she didn’t even make a whimper. Now that’s a baby!

So, onto the cooking–

I went at it in my sister’s kitchen, which proved a maze at times trying to find equipment as well as the constant ‘don’t wake the baby’ mantra running through my head. I had decided there was little chance I could ruin this meat, some salt and pepper to season while it gently came to room temperature, and a gas stove top, unlike the electric relic at my place. I now had the Apple Notebook Air of ovens at KT’s place to the Commodore 64 at mine. This should be easy…

I had decided to make a similar mash to the one that companioned the beef cheeks, however this time adding some of the market baby carrots to join the kumara. I used Heston Blumenthal’s technique of adding the skins to the cream and butter and cooking before all being added to the cooked carrots and sweet potato to mash. 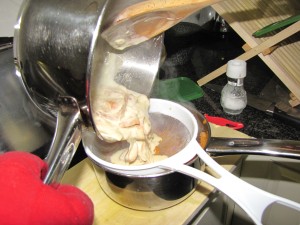 I made a simple salad with the tomatoes, avocado and Lebanese cucumber from the country growers market as well as some baby spinach, capsicum, feta and a small amount of mixed seeds. This was dressed with fresh lemon juice. For those thinking it takes time to make a salad like this, you’re correct. Very little time is what it takes, roughly 3 minutes.

Now for the main reason we’re here, the Buffalo. Like I said, it should be easy. I put the skillet on the heat, let it get hot and added the meat. Straight away not really the sharp sizzling sound I was after… This skillet turned out to be not amazingly operational… The meat lacked a real crispness to it that is desired with cooking steak well. It did enough, but just not quite enough to make this meat what it could have been. That’s the kind of thing that can happen using someone else’s kitchen I suppose. At the same time NN made a small but simple mushroom sauce to accompany the meat.

Never mind, I let the meat sit, salted it again slightly and we sat down to for the all important tasting and devouring of the meal. At this stage we were both pretty damn hungry so it was heads down and mouths open.

How was the buffalo?

Another good question astute reader. It was…. ok. Nothing amazing, but it was good enough and certainly satisfied my hunger. It could have been better, I believe, in a pan that worked properly. Note sis: throw that skillet out. That reminds me, a birthday is coming up isn’t it? Maybe Poppy’s 1st birthday present from uncle Mike. Definitely joking. I’m not that sad. Maybe she’ll get a book- ‘My first meat’ or something…

The creamy mash was just like last time- awesome! The salad delicious and the mushroom sauce tasty, but the overall feeling was that the buffalo was a touch on the average side. It unquestionably had a distinct taste to it and was sweeter than beef, but these steaks, although cooked medium-rare,  matched that of a New York cut of beef that was cooked on a pan just not hot enough: a bit disappointing. 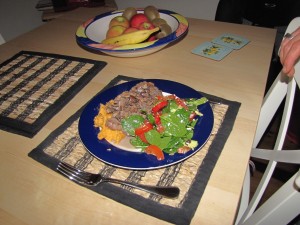 So, I would get this again and have it, 100%. But I’d ensure the pan was piping hot and what I was feeling when I hovered my hand over the pan before adding the meat wasn’t essentially just the naked flame of the element… Caught out by superior equipment!

I’d be keen to try some buffalo eye fillet, which I could have got at the market off these guys, but I had rid myself of all cash with my previous purchases.

Buffalo– there will be a next time. Certainly this year, as I will do American Buffalo or Bison as it is correctly known. However, the key for me, these are different animals and therefore different meats! Asian Water Buffalo will get a go when and if it’s available, and within usable distance of a hot heat!

Wondering the nutritional information of this animal?

Buffalo is similar to beef in that it is high in protein, roughly 21-26g/100g, a good source of Iron, generally containing more than beef and a good source of vitamin B-12, a key nutrient for us humans. It also has low fat content compared with beef.

So once again, that’s another meat done. That now sits at 20, which means a lot closer to half way at 26. Kind of frightening to think the year is going so fast, and that I have 32 meats still to go.

At this point does anyone think I won’t be able to do it?

What would you really like to see me eat? Living in Australia I have had some suggestions that would come heavily under the questionable moral banner, but some I think are possible, I may just lose one or two friends, or, on the flip side, potentially make plenty more… I won’t be eating Koala, however, so do not stress about the weird little bear that seems to be constantly high on eucalyptus.

Join me later this week for some more specific information on training for females, including a new video of me training with 3 strong, sexy and fit ladies. It was hard work! If you missed last week’s post about chicks and training, then click above and have a read- Sexy, fit and strong- how girls should be.

Remember, you can follow me more closely on facebook, for more training, nutrition and health tips, as well as any meat suggestions! Go to: