This week involved a few more phone calls than normal and searching for my, so far elusive, more risqué meat. That led to some deflation and nerves about the reality of getting my hands on many of the meats on my list, and therefore the scale of writing 52 weeks worth of material. At least I’ve got 8 (boomers…) behind me, right? Hmm…

Continuing on with the resistance movements basics, this week I’ll attack the pull. As with the push last week this is referring to an upper body pull, which can also be vertical or horizontal.

I am tempted to do the king of all upper body exercises: the pull up or chin up, however I am fully aware that this is just plain too hard for a lot of people to manage.

So I’ll go for something more ‘challenge friendly’: a horizontal supine body row (or inverted row), in the assumption that people trying this have either a half decent element of strength or at least strive to do get there, in which case practice makes perfect.

Before I go right ahead and generalise, as I’ve stated before, everyone is different and has different needs and specific requirements and this is an important consideration when training someone and designing programs.

We all need anatomical balance and that very much means balancing the big operators in the upper body. So if we push, i.e. push ups, we must pull in order to maintain or gain balance (and ensure we don’t look like the kind of round shouldered, hunched over muppet that can be seen at many Sydney Eastern Suburbs beaches, and gyms worldwide) as well as incorrectly load and imbalance the structures of the upper body, in particular the thoracic spine and shoulder girdles.

We will primarily be working the muscles of the arms, shoulders and upper back, but like all other integrated primal movements we will also be engaging through the core and lower body in order to stabilize and produce more drive through the lift.

The attached photos have full details and key points. Please ask any questions in the comments box below, alternatively I’d love to hear some impressive chin up feats, maybe a one arm chin up..??

Once again I had intentions to get a bit outrageous this week, or at least do something completely outside my comfort zone. The more radical options that are on order from the butcher seem to be harder to come by than first thought. Shipping in a series of random meats for one bloke seems to be more cost inefficient than anything. So I turned to offal, and decided to get some of the intensely nutrient dense parts of the lamb and have a fry up, of some proportion, specifics to be figured out with research.

After numerous phone calls and hearing ‘ahh… not so sure’ I ventured down to pick up some liver and kidney only to soon be deflated at the reality of none being there until the morning. Frustration set in and I aimlessly wandered the supermarket, picking up random ingredients and reflexly eyeing up and subsequently judging other shoppers baskets. Bad habit.

I then decided the only option was the tucked safely up my sleeve plan B, which I was hoping would be months away. But I figured making up a recipe, which this involved, could lead to anything, so why not? Still gotta eat right…

So I bought some free range chicken mince and a few additions to the growing basket of eclectic cooking accessories with the intention of making, what I’m calling Mike’s Grilled Mushroom and Chicken Burger Stack with Mixed Kumara Chips.

I like making healthy and very tasty meatballs/patties, but I usually use lamb or beef, so my sneaky plan B was to do this with chicken for my chicken dish this year. My aim was to make a healthy and very delicious alternative to a greasy, full of rubbish, burger.

I like to create things in the kitchen at times, so decided to get stuck in and create a recipe. I say create, everything’s been done before though really, hasn’t it… Still, I will often use my imagination and ingredients I have and see what I can come up with.

There was a bit of preparation for this dish, so I’ll spell it out. This is what I made-

Chicken burger pattie: (this was enough for 2 large and one small pattie) 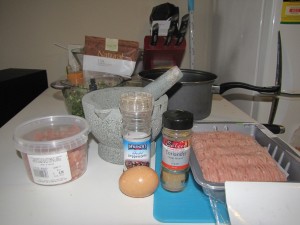 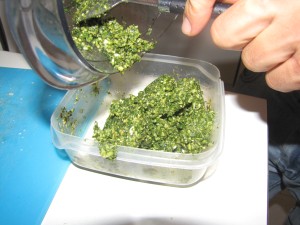 To make the burger patties add all ingredients and mix it all together. Be prepared to get messy, as you will. Plus it looks pretty gross. The amount of LSA will depend on the moistness of the mix, for example having not made patties with chicken before the first thing I did on mushing together was spurt out “oh shit, this is vury (pronounced like that) moist!” So I ended up using quite a bit more LSA to bind, which probably equated to about 2 tablespoons in the end. I had already smashed the garlic, basil and parmesan together in the wizz. 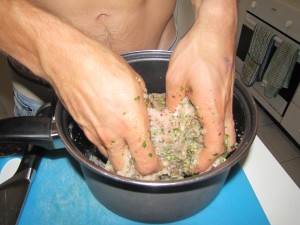 I got slightly, ah, precise on the chip cutting and made them look the part. Once cut, throw in a plastic bag, and add oil and seasoning. 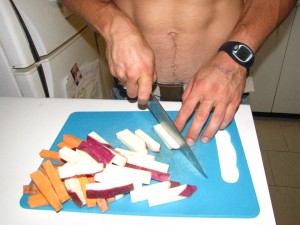 I’ve made this pesto plenty of times before, it’s very simple and quick, and to be honest I don’t use measurements, it’s a bit of a guessing game each time, but I’ve basically got it down now, and this is seriously luscious. Get the ingredients and make it, you’ll think twice about buying pesto again. Mix all ingredients apart from the oil first, then add enough oil as you see fit, probably about 1 tablespoon. It should take less than 5 minutes. You won’t need all of this for the mushrooms but that’s even better as it will infuse and taste even better the next day and beyond. Do it.

For the mushrooms, gently scoop out as much of the inside ‘flesh’ as you can and put in a bowl, then mix in with the pesto and stuff back into the mushroom.

I put the chips in the oven at 180°C for about 25 minutes. I also put the stuffed mushies in the oven for about 20 minutes. While this was going I made a simple guacamole by finely chopping the tomatoes with one of my new super sharp knives and adding the mashed avocado, lemon juice and seasoning and mixing. 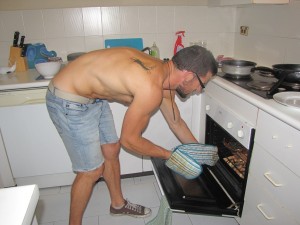 I then got the pan hot and added the patties, let them cook until they were, ah, cooked. The aroma of basil and garlic started to permeate throughout the kitchen. It turns out I may have used a very large clove of garlic in the pesto. That will result in a pretty strong garlic taste tomorrow once it’s infused some more… Maybe I haven’t quite got it down yet. 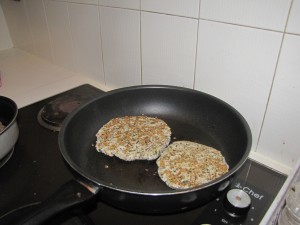 Once all ready to go I made a stack- chicken pattie, then baby spinach, then mushroom and topped with guacamole and a couple of small basil leaves to garnish.

Chicken is one of the more common and run of the mill meats, but the way in which you eat it, besides shoving it in your mouth of course, doesn’t have to be.

This quasi burger was absolutely delicious. Not greasy and filling, but tasty, light and full of flavour and something I will be making again for sure! Of course you could do this exact thing with another meat, however you’ll find chicken to be a lot lighter and much less fatty than beef or lamb and because of that just plain easier to cook.

Again I feel disappointed that I haven’t gone outside the comfort zone this week and possibly cooked and eaten something to shock some people, but I did have an awesome meal, one that I made up and have now added to my, albeit imaginary, recipe book.

Plus, it is a long year, plenty of time to get controversial, for example I’m eyeing up a trip to Bali next month as a great chance to go left (or very well left) of centre. Anyone got any suggestions/challenges for when I’m there?

Tune in next week when I’ll wrap up this series on the basic resistance movement patterns with the bend, and undoubtedly share a bunch of witty anecdotes, wise tips and hilariously chronicle my week of eating including one lucky meat… Note: the above claims are just that, claims… I will however certainly try my best.

Again, please keep the feedback coming and if you like what you read here each week then please continue to share this with people who like to either:

That should cover everyone I think! Much appreciated.

I’m on facebook, have a look. There are a few other things on there as well as the odd link, random thought and time wasting interruption:

Thanks again for another week,

If you are interested in this specific piece of equipment then check out these guys. A close friend’s business supplying top quality exercise equipment for training outside of the gym.

• Bending the knees will decrease the load also

3 comments on “Plan B pulls through”