This week was a different one for me, one of firsts for sure! I got my hands on some balls. Sheep’s Testicles that is, and Sheep’s Brains. I have certainly never eaten or cooked these two meats, but this week I gave it a go. Very ballsy of me right… Ahhh…

However before I dive head first into the tales of grey offal, let me follow on with the information on German Body Composition Training that I touched on last week.

Last week I stated that this kind of training is designed to be hard work, and it is. If it’s not, then you may be doing something wrong, so check the loading parameters such as weight and rest period. This hard work will produce elevated levels of lactate; this will decrease blood pH levels and results in the brain hastening its production of growth hormone.

How do you do this training?

Well you can get specific if you like, in which case this article by Charles Poliquin is a good starting point:

Otherwise to keep it simple for those less trained and eager, try following this basic pattern for a similar style:

Let’s say you have 3 training days, split into-

When it comes to the advanced version, for simplicity, follow the protocol used in my training videos last week. I had intended to have more videos ready to go this week with the next workout in that series, a squat and push, but unfortunately time didn’t permit this week, so I will endeavour to have these ready to go next week.

Back to the Nuts and Thinkers…Before I knew it Wednesday had rolled around following the Easter break. The realisation that Thursday was the only option for my meat night meant slight panic as there might not be enough time to organise a meat that is bit more abstract than your normal meat (as is the norm for me these days).

I currently sit in my lounge a bit before dawn on Friday, the Boxing Day to my weekly meat adventure. I awoke early so I could do some writing while this was all fresh in my mind, however the main thing that comes to mind right now is: boy was I wrong with that initial panic, a day can be a long time when ordering meat.

I contacted Kristy from The Butcher and the Chef and she originally expressed some alarm as well. However we put our collective brains, thumbs and phones together and I asked if any offal was available, perhaps some brains and testes. Kristy replied that lambs brains were in stock and some lambs testicles were due in Thursday– D Day.

A cacophony of puns flooded my mind at once as I came to the self agreement that I had to man up at some stage and feast on some brains and balls, so what better time than now? No viable retort presented itself, so I typed these fateful words to Kristy: “Hmmm, I’m going to have to ‘man up’ and eats nuts at some point! Righto, sounds good.” For your information, it did not sound good at this point.

Thursday afternoon rolled around very quickly, however there was a timing issue with the nuts and thinkers. The testicles were still being delivered to Manly, before they then made their way to Potts Point for me to pick up and eventually eat.

It was decided ‘just in case they’re repulsive’, along with the fact that I was hungry that this meal would be a series of small tapas style dishes with a lamb theme. The brains and rocky mountain oysters as the last course.

So a trip to the butcher and supermarket saw me purchase a few French Lamb Cutlets, a few Spanish Lamb Merguez Sausages, as well some Prosciutto to wrap around Asparagus and some Swiss Brown Mushrooms and Sweet Potato to make some Kumara Chips.

The main dish was stuck in traffic, so homeward bound with the rest and another trip was made when the testes dropped. (Ha!) I mean were dropped off. 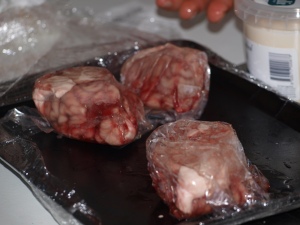 I had studied my recipe books and the internet briefly on how to do these two ‘delicacies’ and I had decided to use a recipe I had for brains and treat the balls the same way, whilst making a couple of small adjustments of my own. The end result of this planning was that I was going to have to allow considerable time to let these brains and testes mature to a ready state. They needed to reach their dinner puberty you might say…

I had 6 testes and 6 brains, a lot for any man, so I only used 3 of each. I thought perhaps the whole lot might be a touch ambitious on this first attempt. However whilst contemplating this I was rolling one of the testicles in my hand and pondering the meal to come. Something very primal was occurring without my full intention.

I had the 3 balls and 3 brains to be eaten soaking in cold water for an hour in order to soften the outer skin of the testes and remove any blood clots from the brains. Once this was done I added them to my recently acquired pot/mortgage (see Goat post: A Family Feast) which contained a vegetable stock, water and 1 cup of dry white wine and put on the stove top. At this stage the brains were incredibly soft and extremely fragile, the balls on the other hand just felt like balls really…

At this stage we sat down to enjoy the first round of dishes, a sneaky cheat you might say, ensuring that there wasn’t a huge hunger when the time to eat the little gonads and brains arrived. Plus I was starving so these delicious sausages, cutlets and asparagus were a perfectly timed addition to the pre-offal dining. 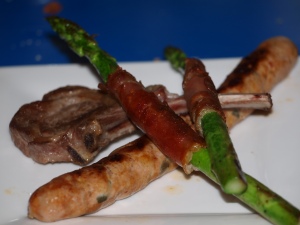 The kumara chips hit the oven, a small salad of rocket and pear was prepared and the mushrooms cut and ready to hit the pan. Once the offal had reached the boil they simmered gently for about 5-10 minutes before tenderly being removed and cooled by running under gently running cold water.

I had decided to abandon the traditional crumbing of flour and breadcrumbs and instead opt for a small amount rice flour, egg and some almond meal. 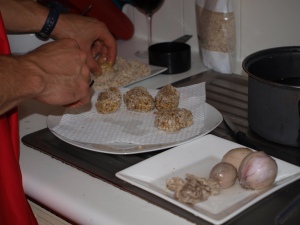 With the brains removed of the brain stem and the testicles stripped of the outer skin and sliced into more bite size chunks, I dipped and crumbed in the order of ingredients listed above and they hit the pan to be shallow fried and begin to resemble something much more friendly to the still hungry eye.

Soon enough the moment of truth arrived; a plate containing sautéed mushrooms, rocket & pear salad, kumara chips and the all important brains and testicles ready to be devoured. Well perhaps not devoured but tentatively ingested with varying looks of terror, dread and excitement across the four faces in the room.

I had with me my trusty sous chef Nardia and we had also managed to talk one of my flatmates, Paul, into trying some of my meat this week. However he was informed he wasn’t allowed to know what it was he was about to throw down. Great fun ensued, screwing with him as he nervously asked questions about his future meal. At least he had the, ah… balls to go through with it, unlike flatmate number two who had seen the raw meat and quickly rejected any sign of an invite to dine.

Paul’s initial reaction as I presented him with ‘just some chicken nuggets bro’ was dubious and even more inquisitive once he laid eyes on the crumbed goodies in front of him. “Are these sheep’s balls?! Are they? What is it?!” No help was given as we all tucked in and tried some testicle first. 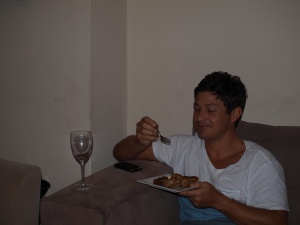 By this stage I was quite excited about trying both of these offal offerings. It could have been the primitive urge to eat these crucial (but often overlooked) parts of the sheep, or maybe just the terror on Paul’s face combined with the overall hype of the last few hours which had created a want in me to gulp down these daunting meats. 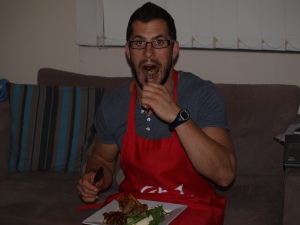 I thought the testicles were a bit like scallops in texture but the taste is harder to pin point. The brains were different again, softer and slightly more disturbing on the tongue– given that it’s nothing like chowing down on a fleshy steak,- but quite a nice flavour nonetheless.

I don’t think the others quite thought the same as me, Paul was disgusted by the brains but not as overly critical about the testicles, however he reached his limit pretty snappy and claimed that he thinks having a mouth so full of balls may have turned him gay. I don’t think it works like that buddy! Nardia was the opposite of him, more a fan of the brains than the testicles, but still not desperately fond of either.

So it was summed up that Paul would go balls over brains, Nardia brains over balls and myself leaning more to the brains as well. Perhaps that speaks volumes about us…

I ate all of mine, and the mushrooms sautéed in a little butter and balsamic vinegar were a delicious addition. Paul left a bit on his plate and Nardia did better than him but didn’t quite polish off her serving. There’s only so much testicle that can be consumed I suppose…

So would I eat them again? Yes! However I think I would look to next try them at a well respected restaurant to see how they do them. I do think I did pretty well for a first attempt at cooking them, but on reflection perhaps the testicles could have poached for longer, possibly softening the meat some more. I would love to hear if anyone has had them done differently to this. Please comment below and share your experiences with brains and testicles. Eating sheep’s brain and balls that is, not other random experiences with brains and testicles.

I do still have 3 of each in my freezer.  The testes are quite large ones, slightly more intimidating than the smaller ones we ate. If anyone has brains on their mind and thinks they have the balls and wants to try, let me know, I’m happy to share! I may have another go at them, but it seems there may be only so much testicle one man can handle.

Perhaps I should send some round to my friend Craig who got married over the weekend. He usually has a firm handshake, but upon greeting him at the church, before the ceremony, his limp hand fell from mine like a deflated balloon. I couldn’t help thinking- this man need some balls and don’t I just have the perfect thing for him! Luckily for him it went smoothly and a great occasion was enjoyed by all. Congrats Craig and Francis, all the best for your future together and may your years grow with love and happiness.

And once again that’s another week done. I’m off to repeat the goat curry from two weeks ago, and I can’t wait! Has anyone else tried repeating their own versions of any of my meat meals? If so please let me know below.

6 comments on “All balls and no brain?”