I’m quickly discovering that I have become rather, in fact perhaps very, blasé about eating strange meats. Strange to some, taboo as well, freaky even, but just plain old meat to many others.

Last week I received an email from a reader in South Carolina in the US. He hasn’t tried eating possum, or Opossum as it is there (or hadn’t, one possum eating week may very well have passed by now…), but knows of people in the south of the US that catch them and keep them in a cage while feeding them up on less scavenger like foods and clean out the animals digestive system. In fact he had never heard of people outside of that area eating possums.

Well, he has now! And so have many others right? However, my point here is that what is taboo and completely other worldly to some is simple run of the mill dinner for others.

This raises the question in my mind again- Why are so many people going hungry? Not just in third world environments, but everywhere. There are animals out there to be eaten, if we could simply get over our beliefs that some animals shouldn’t be eaten, while it’s perfectly fine to groom others up for a tasty BBQ.

Cute, friendly, intelligent, wrong; these words are often used when it comes to describe certain animals as meats. That’s only one view (and often sadly in my opinion the view of the masses). What if a society’s view was that Three Toed Tree Sloths were a possibility for farming and eating? These guys are lazy as all hell and won’t take much catching. They would make for a tender feast! We could round up a bunch and get a nice little farm going, if only they’d get off their branch and procreate some more! Lazy!

Now I’m not suggesting we go sloth hunting. In fact I wouldn’t even know where to start. What I’m getting at is that as a society we are far too precious when it comes to our food and the animals we’ll happily slaughter for food, meanwhile the world over there are endless people starving, becoming immensely malnourished and even dying. Some amazing charity work is done to provide food to some starving third world people, but the problem here is they get, mostly, nutrient deficient grains and flour. What they need is some nutrient dense meat and animal products. I’m talking fat, offal, marrow, stock from the bones and fermented meat.

We know that there are animals getting killed for other reasons and the body being wasted. This is a crying shame; many species of marine life considered less desirable being caught in massive fishing nets and simply discarded, possums being culled in New Zealand to protect farmland, flora and fauna and the skin and fur sold while the bodies, for the most part unless perhaps a hungry dog is nearby, just left where they are slaughtered!

Don’t you think if these were butchered properly and frozen they could be used at homeless shelters, shipped to starving third world children or even a cheap feed for a cash strapped family. We are, of course, facing the end of the financial world as we know it aren’t we…?? A nice slow cooked possum stew for dinner?

Have I convinced anyone to try some different and more obscure or taboo meats?

Obviously I hope so! Living inside our comfort zones is something modern day people just love. It’s so damn cosy in there isn’t it? It’s hard to think of others and the greater good sometimes, but if we all did that a bit more, perhaps pushed the boundaries of our comfort zones a little, we could possibly do some real good. Open our eyes to the wastage that happens and put our money, resources and influence to much better use.

I challenge everyone to try and eat a meat well outside of your comfort zone this week. See what all the fuss is about. You might just surprise yourself and realise that- you know what, this isn’t too bad. You may just see the potential for more options in your diet and as I’ve well and truly ranted above; the possibility that as a society we waste so much potential nutrition for ourselves and those much less fortunate. Nature provides and has an amazing cycle of life and food chain that works.

Anyway…. that’s exactly what I did this week; ate something outside my comfort zone.

Now I’ll quantify this by saying this was well within the comfort zone of many others, and I have eaten it before. However, as I’ve stated before, seafood was not big for me as a kid. In fact I mostly stared clear, especially of a whole fish. So to me, in the past anyway, the idea of cooking a whole flounder and facing that on my dinner plate was an uncomfortable one. Of course these days I’m pretty blasé, as I’ve stated, so I was keen to give it a go even though it was foreign territory.

Happy to eat a sneaky little possum one week but uneasy at the thought of a whole fish, I’m pretty simple at the best of times, but can be a complicated, multi layered creature, just like the onions I so despise, on other occasions.

So it was my second trip to the Sydney Fish Markets, but this time with company. I need my hand solidly clasped to another sometimes when venturing outside my safety bubble. NN sacrificed her sleep in and accompanied me to see what we could find; as it turns out- seafood and that alone really. I’ve done a few meats from the sea so far this year, but something a lot more challenging for me like a whole fish was far more attractive for this week’s blog.

So I decided on 3 lovely looking Yellowbelly Flounder.

We enjoyed a cup of tea while we talked strategy and recipes. It became a case of less is more, so some asparagus, broccoli and green beans to go with our lemon and dill roasted flounder.

I rushed home from work to find most things ready to go and the 3 little fish eyeballing me on entry to the kitchen. Time to suck it up and get them cooking!

I scored them as best I could with the reasonably blunt knives, seasoned, added the lemon slices and chopped up dill and drizzled with extra virgin olive oil and they went in to the oven at 200°C for 20 minutes. 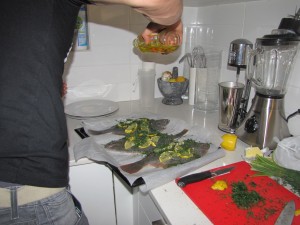 Smells spread throughout the flat and stomachs growled.

The greens were snap steamed and tossed with a chunk of organic butter. That was easy. It was getting the now cooked, and I might add slightly more attractive looking, fish onto the plates that was more of a challenge, but I succeeded and faced my first meal of an entire fish. Gulp…

Once I’d figured out how to gently pull the meat away from the bones I had to decide if I should a) eat the skin and b) eat all the other interesting little bits. I settled for some of the skin but left the guts etc for the scrap heap; a bridge too far when it came to these little guys. I did have to slow my attack on the plate from my usual pace, but it was worth it as the meat was absolutely beautiful!

Tender, tasty and delicious, that simple.

Would I have it again?

No doubt. I can’t see myself buying whole flounder at a regular intervals, but when I’m back in New Zealand I’ll gladly join dad in devouring some fresh caught Yellowbelly’s.

NN was the same and loved it. She has more of a history with this though and actually ate it, regularly, as a kid. So did I match up to that? Ah, I’m saying hell yes. She was a happy little stuffed diner afterward, so a chef takes the smile as applause in this case.

I’m not yet sure. I am going to New Zealand later this week so I might just have to make the most of my few days there and have some local flavour. I’ll have to see how this short week pans out for me and my meat eating.

As always, please keep the questions and feedback coming. I have had some great emails and messages lately, certainly the possum dinner seemed to create some thought with readers. I have also had questions about meat, cooking, training, nutrition and a variety of things to do with health in general. If I have the information or am able to get it, I’m happy to answer questions or help out where I can.

And that’s it for the meat until I return from The Land Of The Long White Cloud,