A so-so week at Yum Cha last week couldn’t put me off remaining in Asia this week. Albeit with cuisine I find much more enjoyable. A movie themed, village style restaurant meant anything could happen here…

Before I get into this, let me tell you- after 31 weeks of this challenge (more ‘dining out educational tour’ really), we finally wrote a list of places, foods, cuisines etc to visit. I felt somewhat proud of us as we did this.

Still, it wasn’t overly handy this week as NN was working all weekend and I was left with the task of finding us somewhere… I went to the one place I suggested for our list – Chinta Ria: Mood for love – and left little to chance. I’m sure the list will come into play in the coming weeks, however.

Now when I booked this I hadn’t been to this exact restaurant, I have been to their other eatery Temple of Love, and well, I loved it. It would appear this one is a little different, but in a good way. The menu handed to you in a manila folder with the restaurant name being the ‘movie name’ and the menu split into ‘scenes’. It was kinda cool, however, as we all know, this is about the food, so did it stack up?

China to Malaysia, who wins out?

The movie feel had me liking the menu already, but checking the contents, I was impressed. All incredibly delicious sounding, with many popping out as possible order selections, the number one was the Tom Tom Broth: prawns, squid, chicken, mushrooms and carrots served in lightly spiced chicken broth.  As someone who is secretly (read; obviously) a bit of a nutrition and food geek, I couldn’t go past this.

Bone broths are one of nature’s actual genuine superfoods. I personally believe this term is bandied about flippantly and erroneously by many people, however, there are a few foods I deem to be proper nutritional powerhouses and bone broths are most definitely one of these.

Bone broths (stocks), while at the very least are economical on the pocket and respectful to the animal that has been killed, contain copious beneficial ingredients.  Unless you’ve been buried under a rock, or chicken carcass, you’ll be aware of the reference that chicken soup cures the common cold and flu. Well, this is a long standing belief that has been proven by modern research, been shown to prevent infectious disease.

There are many reasons for this, and of course the science is complex, but to simplify it, here are the basics:

Of, in our case at Chinta Ria, diners. These days I am a sucker for a good broth, making my own nearly weekly by simply adding all the ingredients to the slow cooker and leaving it for a day. However, to make them yourself on the stove it is still incredibly simple, it just requires a little more attention. Watch my video recipe here on how to make a brilliant broth, albeit a Turducken stock- from the bones of meat number 52 from last year’s 52 meats challenge. 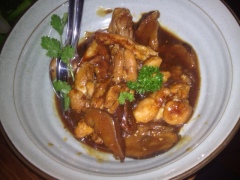 The Tom Tom Broth was beautiful, and the geek in me could feel my super powers strengthening as I slurped away… I find it very hard to go past Satay chicken skewers, so we had them too- pretty damn good. I chose the Mama’s Mood for main- slow cooked chicken and shitake mushrooms with ginger and Chinese rice wine. This was also pretty good, so I left this place incredibly satisfied, and one f the biggest reasons I haven’t even mentioned yet- The Mixed Greens!

This is where the geek fully comes out- these were easily the best greens I’ve had at a restaurant; crisp, tasty and delicious.

And that’s probably about time for me to quick, before I lead you into thoughts about how sad I am. Bone broths, greens and health… clearly get me going. NN, please take over, before I lose them…

I can’t believe MC didn’t mention the greens earlier in the piece.  They were incredibly delicious, and as MC mentioned, were probably some of the best greens we’ve ever had, however, MC was unusually over enthusiastic about them, and those bloody greens became the main topic of conversation that night (well that and geeky training talk, but that’s a different story).

Saturday night was the first time I felt like that stereotypical geeky training couple.  We were going off over the greens and debating **cough** arguing, over who we thought were the world’s greatest athletes … total nerds…

Anyways, greens aside, my meal was nowhere near as delicious as MCs, and that is because I ordered the wrong dish.  What sounded like a wholesome chicken dish, in reality, turned out to be little pieces of thick battered, deep fried chicken coated in a thick mayonnaise dressing.  I felt tricked into ordering this as the description given was ‘lightly coated & wok tossed chicken pieces’.

In my head I thought that ‘lightly coated’ would have been exactly that, lightly coated, and in hindsight I really should’ve asked the waiter what it meant.

I learnt a lesson that night – never assume that what is described is what you think it is, and, if in doubt, always ask the waiter.  I ate a tiny bit, but unfortunately the majority of the plate was left untouched – and before you even think ‘what a waste’, no it wasn’t because I wasn’t going to compromise my stance on quality food, for the sake of saving money.

I can’t believe that it is Week 32 already!  MC and I have had quite a difference in opinions on the restaurants in the past month, so I hope that our newly made list will bring us some unity in the coming weeks.

Now, better have me some bone broth…