Always a minefield of what to eat- The Airport – provide generally shitty food. The plane is even worse. And for the frequent traveller, having a clue of how to attack it is most of the battle. Below we outline some key points to consider and try.

Ambience- 5 (can differ depending on purpose for flying…)

Extra mile- 0 (due to outrageous cost)

Budget – Expensive (for what it is)

The Airport rating – 20/50 on an unjustified budget

This is the blog that I had been dreading doing; mainly because it is synonymous with crap, yet it is the one place that most have eaten at, and do so regularly.  The irony in this is that Mike and I were on our way to Melbourne to embark on a gastronomic food safari, so starting our weekend off by dining at the Airport (yes, I did say Airport), didn’t really fit the bill.

Why the airport you ask?

Well its one of those places that we get asked about the most often – What can I eat when I’m waiting for a plane, besides the typical fast food joints of Maccas and Burger King/Hungry Jacks?

The first obvious answer to that question is ‘don’t’.  Don’t eat anything from the airport – if needed, fast – but I’ll let MC talk about that.  The second is ‘BYO’ your own food (which geekliy enough is what we did on our return flight), however, if neither of those options work for you, you desperately need to eat, and you don’t have access to the Airline lounge, then here is what you do…. 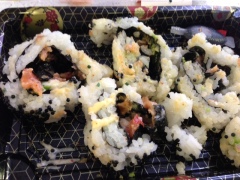 Most modern airports have access to ‘healthy options’ foods, such as salad and sandwich places, but when these aren’t available to you, get creative.  Go to a few different places and purchase small items that when combined make up a decent meal.  I was starving and needed a decent amount of protein, so after trawling through the different joints decided upon a tuna sushi dish.  Knowing that MC would also come back from his ‘hunt’ with extra bits and pieces, I knew that this would suffice.  I never had any intention of eating all the rice – I mainly wanted the protein.   In the end though getting through all those pieces of tuna and sushi with extra nuts and an apple, made for a well balanced, healthy, satisfactory meal.  Of course, it wasn’t cheap, my meal ended up costing over $20, however, as our food philosophy is about quality, $20 – big deal.

Our flight was only an hour, but if about to go on a long haul flight, I think that it is even more important to have a good eating strategy.  Admittedly airplane food has come a long way, however, the quality of the ingredients used are still dubious, and more often than not still cause a fair amount of gut discomfort (i.e., think bloating, pain and gas – not cool when in a confined space!).

Here’s some BYO food ideas for those longer haul flights:

Yes pre-packing your food is geeky and takes time and effort, but just because you are flying is not really an excuse to compromise your quality eating.  Besides, if you are going to go on holiday, or away for business and you know that you will be indulging, then save yourself for those times and fully embrace indulging on luxurious treats – not on skanky plane/airport food. 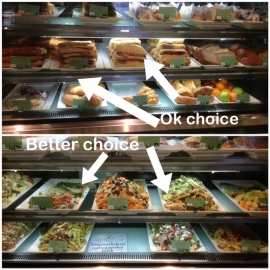 I always hear the words of Jerry Seinfeld play in my head when it comes to Airport food:

Do the people that work in these little shops in the airport have any idea what the prices are every place else in the world?! What do they think, they’ve got their own little country our there? “Tuna Sandwich: $13. Tuna’s very rare here.”

It is ridiculous, but if you must eat, well, it’s just one of those things you have to bend over and take. So to speak. 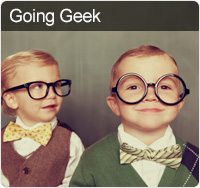 However, as NN mentioned, there are options and certainly ways around the often shitty choices. Going geek is a sound option, and recommended.

Regardless of what you’re doing, going full geek from time to time (at least) is a sound option.

So, in saying that, full geek in this sense can also mean not eating. Which is to say- fasting.

Now this is generally something I’ve recommended to people, ONLY if they have a good grasp of nutrition and what they eat on a daily basis. That doesn’t necessarily mean taking notes for each and everything- this is a short term practice in my coaching program only- it simply means having awareness of what you eat.

That way you can easily utilise periods of not eating – or fasting – to avoid eating shitty food, or whatever the reason is.

And in the case of some airports and many airlines, the food is shitty. So as much as having the odd crappy meal or day isn’t the end of the world, also, why bother with such crap? It’s not crap that it’s immensely enjoyable crap, it’s just crap.

So heading down the road of fasting when dealing with airports/flights may look something like this:

Of course there are many scenarios and choices of direction to take with this, so you do really have to find what works best for you. So, in order to give you the knowledge, and hopefully power, to make those decisions yourself, I’ll point you in the direction of a post I wrote on ‘not eating’ on my Unleash Your Alpha site, which you can read here.

That breaks down how I’ve done it and how it can work for you. For anything else, I recommend following and reading Brad Pilon of ‘Eat, Stop, Eat’.

The airport can be your best friend, or your worst enemy. Just approach it intelligently (LIKE ANYTHING) and you’ll be fine. But do not get caught in a mindset of- ‘I’m doomed to eat crap’.

Next week- an eating bonanza, not shit! I’m excited to bring it to you…