The feast (Four in Hand restaurant)

A pig, a whole pig, and nothing but the pig.

I think that’s how the saying goes, right?

It did for us this week that’s for sure, when we took part of a group feast that took down two pigs!

Yes you read that right – we ate two pigs – and they were delicious, of course. There’s something to be said for taking part in what feels like a scene straight out of Game of Thrones, minus any swords and killing. Well, apart from the piggies, and the carving knives…

And that thing is- it’s awesome. Simply awesome.

Any return reader to this blog knows my weakness for meat; that is, I like it, a lot. And occasions that involve a whole pig are rare treats in the meat eater’s life.

Now I know what some will say: “A pig is a filthy animal…”

However, I’ll argue that even though pigs can live a dirtier life than some animals, as long as they are brought up in a- free range, roaming the paddocks, eating the kind of food they naturally eat- kind of way, then they not only provide extreme dining satisfaction, but a great source of protein and nutrients.

One piece of advice I have for people eating pork/bacon/pig in general is to ensure you eat slowly, chew it properly and only eat until you’re satisfied, not stuffed. The meat can take a little more breaking down in the stomach, so it’s imperative to help your digestive system by doing most of the work before it reaches your gut. As you should do with any food, FYI. 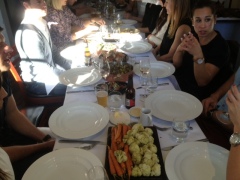 Now, this was a feast, make no bones about it (oh there’s a sweet dad pun in there somewhere…), and gladly my mate TJ was celebrating his birthday, so when his better half suggested a group lunch, I couldn’t resist suggesting the Four in Hand Restaurant for their suckling pig. It not only provided us a great opportunity to get a large group together, but it meant doing something quite rare these days- having a massive feast where an animal is the centre piece and communal dining and friendship is prevail.

It’s simply, great fun to get together and enjoy a meal like this.

Plus, I got to down one of the little critters tongues and snout. It’s not every day you can do that. “Oh the nose is full of collagen!” I could hear the girls say, they just weren’t game enough to eat it. I, on the other hand, am happy to try these parts, and am a firm believer in using as much of the animal as possible. Which is why when the large amount of leftovers were offered to the group, and everyone still full of pork and amazing side dishes, said no, I said “Ah, hell yes I’ll take some home. Put that pig in a doggy bag please!”

In the end we had an amazing lunch, in awesome company and all felt a little medieval and regal as a result. We also left pretty stuffed, I of course had some pork to take home, and I was generally excited enough that still carried over into the next day (this day), so much so that I know I’ve just written a mess, part pseudo advice, part meat-drunk rant, part story. I think.

Either way, if you can find somewhere that will do it, I strongly suggest you try getting a group together and sitting down to a feast of suckling pig.

NN, what did you think?

There is nothing more satisfying then taking down a suckling pig or two with friends.  Of course, the fact that we were eating whole suckling pigs, lent itself to many table jokes – we wondered if we were eating ‘Babe’ (the cute but delicious looking pig from said movie) or possibly the pig from Charlotte’s Web.  After a lot of conversation around this, we all agreed that being present at that table would not be good if a) you were a kid who had just watched ‘Babe’ or b) you were a staunch vegetarian.

Watching them bring out a whole pig is quite a sight, impressive even, and whilst my tummy grumbled at the thought of getting him into my belly, I was also quietly grateful.  Traditionally speaking, when an animal is presented in this manner to a large group of people, thanks is given to both the animal for giving its life and to a higher being (god, universe, whomever…) Cultures around the world have been giving thanks to their food for thousands of years, because they have understood the natural link between life, death, nourishment, and the on-going circle of life (cue Lion King music).  Something that today, in modern society we have forgotten about, shame really.

The pigs were the centrepiece of the meal, and they were amazing, however, the side dishes that were presented certainly held their own.  Dare I say it I ate more of the side dishes than the actual pork because they were so good.  The creamy mashed potato and Brussels sprouts alone are worth going for!

When faced with so much meat it is always a good idea to get as many vegetables (particularly if they are steamed) and green leafy salads in at the same time to help the digestion process.  Eating loads of protein in one hit is going to be particularly taxing on the digestive system so it’s a wise idea not to drink too much water with the meal. However, the great news is that accompanying your meat-laden meal with a glass of red vino does aid the digestion process of protein – history does have it right.

The Four in Hand won me this week (if you recall its Pub meal early on the year did not), and I would certainly recommend this culinary experience to anyone who loves good, high quality food, and the idea of (gratefully) smashing Babe.